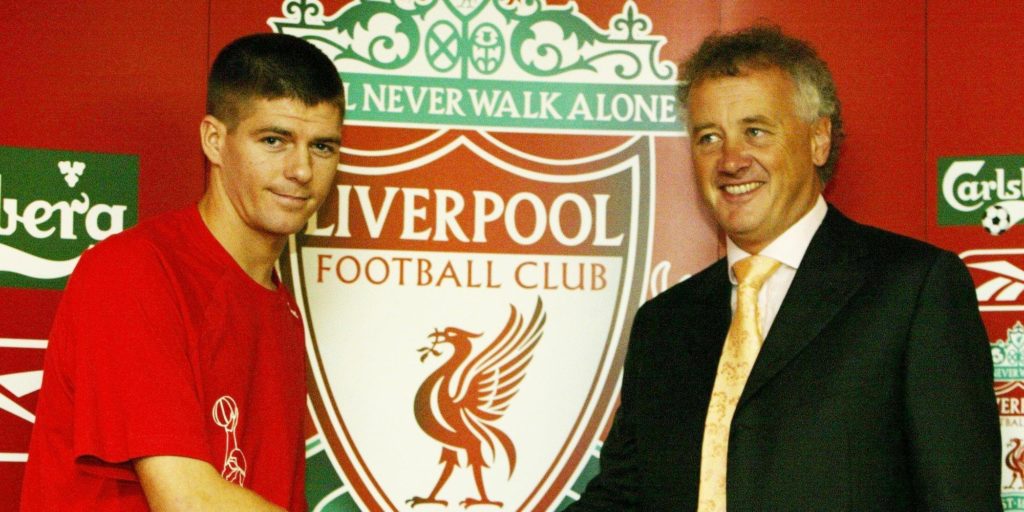 The England midfielder rejected Chelsea to stay on Merseyside.

Liverpool’s Steven Gerrard shakes hands with Liverpool chief executive Rick Parry during a press conference at Anfield where he confirmed he was staying with Liverpool.

The summer of 2004 was one of turmoil for the Reds. Gerard Houllier resigned as manager after a trophyless season, and Gerrard – one year after signing a four-year contract and taking on the captain’s armband – publicly contemplated moving on amid links with Chelsea.

The 24-year-old considered his options while on holiday in Portugal, and then returned home to hold lengthy talks with Parry.

A day later, the pair appeared together at the press conference to confirm Gerrard would be staying at Anfield.

“It is slightly unusual today in that we are announcing that a player is not going anywhere but when that player is Steven Gerrard you will understand the significance,” Parry said.

And Gerrard himself made clear that the outcome had not been guaranteed.

“I’ve not been happy with the progress the club has made and for the first time in my career I’ve thought about the possibility of moving on,” Gerrard said.

“But I’ve gone with my heart. I’ve made a decision to stay at Liverpool and I am 100 per cent committed to the club.”

A year later, with a Champions League winners’ medal in his collection, Gerrard publicly flirted with Chelsea again and seemed set on a move when he initially rejected a new Liverpool contract, only to have a change of heart and commit his future once again.