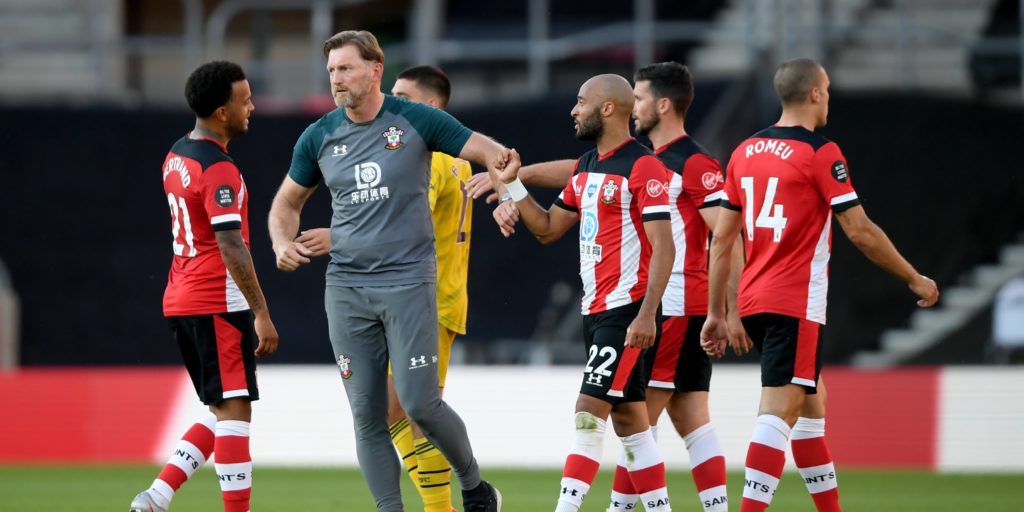 Southampton went down 2-0 at home to the Gunners last time out.

Southampton manager Ralph Hasenhuttl expects a response from the meek and entirely avoidable defeat to Arsenal when his side head to relegation-threatened Watford.

Having returned from the coronavirus suspension with a bang, Saints failed to build on their 3-0 win at Norwich when Mikel Arteta’s Gunners came to town on Thursday.

Alex McCarthy’s atrocious pass gifted Eddie Nketiah the opener and a comedy of errors allowed Joe Willock to wrap up a 2-0 victory for Arsenal at St Mary’s.

Hasenhuttl bemoaned those mistakes and a lack of intensity against the Gunners and fully expects a response at Vicarage Road.

“When you compare it to the Norwich game, for example, then we had half the sprint distance (as) against Norwich,” the Saints boss said.

“You can argue that it was a little bit hotter, but this cannot be the reason why.

“When you know our game and how intense we want to take it, then it is quite important for us to have high-speed running.

“This is why we didn’t have so many ball wins in the opposition half and it takes too long to win possession in the opponents’ half.

“Then you had some chances, but the chances are not so good in the transition situation.

“We stayed in possession for too long and didn’t have chances of quality and that’s not because the opponent was so strong, we must be self-critical and accept at the moment that at home we don’t show the same habits as we show in away games.

“We have to be motivated and this is not a question of how many points we have.

“We know every win gives us the chance to climb the table and the chance will be there until the end of the season.

“There is no reason to be not motivated. If we have a game for three points in the Premier League then it must be enough to be motivated.

“I can tell you this defeat we had was absolutely something that will make us show a reaction at the weekend.”

Saints sit on 37 points ahead of the trip to Watford and Hasenhuttl is looking up the table rather than fretting about being sucked into the relegation zone.

“We don’t think too much about whether we are safe or not because it gives us the feeling maybe of leaning back. We don’t want to lean back.

“I think we were disappointed about the game because there were more possibilities for us, especially in the second half where we played a little bit better, but overall we invested not enough.

“We were pushing for the goal enough and gave the goals away, conceding too easily, and it wasn’t quite like the performance in the first round (at Norwich).”

Jack Stephens will miss the trip to Vicarage Road following his sending-off against Arsenal – a match Sofiane Boufal missed with a thigh complaint.

Moussa Djenepo this weekend serves the final match of a three-game ban for his March red card against Newcastle.