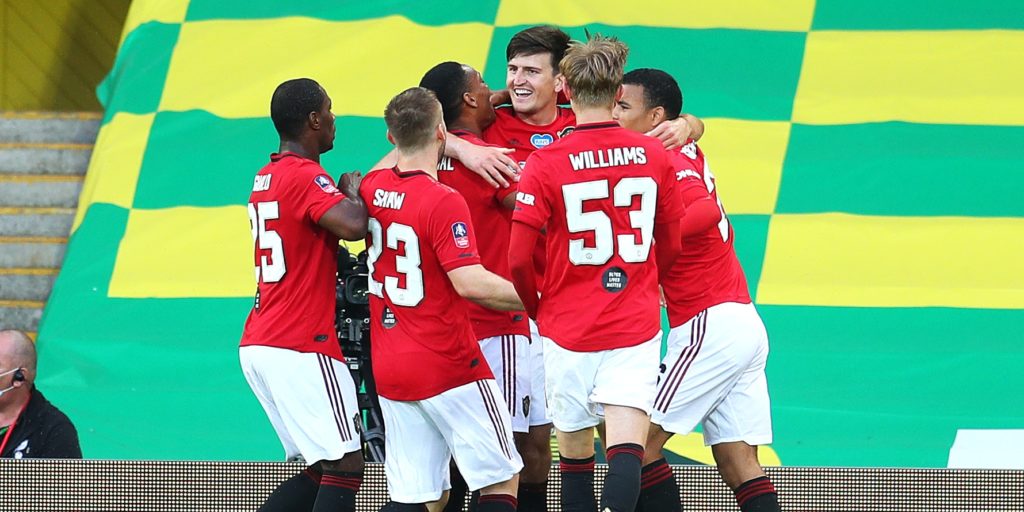 United had to dig deep against the Premier League’s bottom side as Odion Ighalo’s fifth goal in four starts for the club was cancelled out by Todd Cantwell’s strike from distance.

Timm Klose was sent off in the 89th minute for bringing down Ighalo, after which United found stubborn resistance from Tim Krul during extra-time, but the Norwich goalkeeper was beaten when Maguire reacted quickest to direct home in the 118th minute.

Maguire was the subject of some fierce criticism from former Manchester United captain Roy Keane following last week’s 1-1 draw at Tottenham but Solskjaer could not have been prouder of the centre-half’s display at Carrow Road.

The United manager said: “Harry has been magnificent since he’s come to the club, his leadership skills are there to be seen, he helped us with the build-up.

“Today I think he won every single header and every challenge, so I’m very pleased with Harry.”

Maguire’s effort from close range at the death is his second goal in this season’s competition, with his first a 25-yard pile-driver against Tranmere in January.

Solskjaer added: “The two goals are two different goals and maybe two goals you don’t expect from him – one from 30 yards in the top corner and then a poacher’s goal.”

United became the first side to seal their spot in the last four and two wins at Wembley would secure their first trophy under Solskjaer’s direction.

But while they extended their unbeaten sequence in all competitions to 14 matches, Maguire knows they must vastly improve to go all the way in the cup.

“It would mean everything (to win the FA Cup),” Maguire told the BBC. “I joined this club to win trophies. We’re in a semi-final of the FA Cup, it’s a great tournament, and we’re going to look forward to it.

“Hopefully when the semi-final does come, and whoever we’re drawn against, we play a lot better than we have done tonight. It was a difficult game and we made hard work of it.”

Solskjaer also had warm words for Ighalo, who continued his record of scoring at least once in every United game he’s started.

The Norwegian said: “Odion knows how much we value him in and around the dressing room and, of course, on the pitch.

“He’s a goalscorer and a poacher, he’s strong and we can play the ball into him like we did on the winning goal.

“He’s performing well and that also gives me the chance to rotate with Marcus (Rashford), Anthony (Martial) and Mason (Greenwood) so they can get a rest and be fresh for every game.”

Norwich head coach Daniel Farke felt his side deserved better than to suffer a last-gasp defeat.

He said: “Football can be cruel sometimes and it can be the cruellest sport in the world.

“Of course it’s a disappointing outcome for us. I think the lads deserved more. They left their heart out on the pitch.”

Norwich’s attentions now turn to top-flight survival. The Canaries are six points adrift of safety with seven games remaining but Farke insists they can take heart from how they performed against United.

The German added: “Manchester United are totally on the up and more or less on the way to finishing in the Champions League positions, they had all players available.

“To deliver this performance is good for the confidence, without any doubt. In terms of confidence and mood, it was definitely a big boost.”