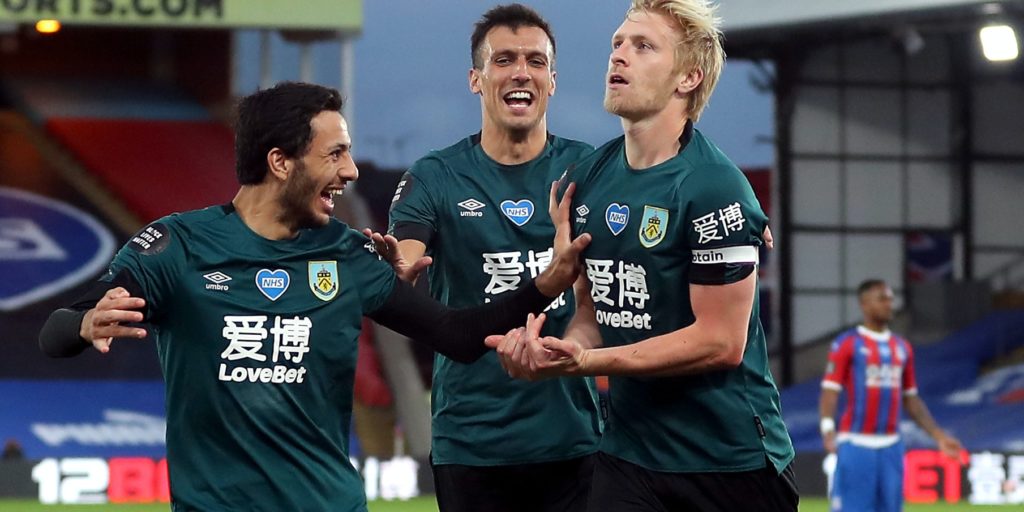 The Clarets defender was making his 300th league appearance for the club and scored his first goal since January 2017.

Ben Mee marked his 300th league appearance for Burnley with the winner at Crystal Palace to continue to lead from the front for the Clarets.

A week on from revealing how “ashamed” he was at a plane carrying the message ‘White lives Matter Burnley’ over the Etihad Stadium during the club’s 5-0 thrashing to Manchester City, the defender was impressive throughout in south London.

Mee ended his three-year wait for a goal with a header in the 62nd minute and it sealed a 1-0 win to move Sean Dyche’s men up to eighth in the Premier League.

Palace, despite enjoying the better of the contest in the second half, could not respond and suffered a second consecutive defeat.

Burnley were without Jay Rodriguez – the matchwinner against Watford on Thursday – and due to a lack of options, Dyche could only replace him with defender Erik Pieters.

Despite having no Chris Wood, Ashley Barnes or Rodriguez, the Clarets made a strong start at Selhurst Park.

Lone striker Matej Vydra was supported by Dwight McNeil, in an unfamiliar number 10 role, and he should have done better with an effort in the 19th minute.

Ashley Westwood’s corner was only partially cleared and traditional winger McNeil drilled over from inside the area.

The Burnley number 11 was on the charge again a minute later, but could only fire tamely at Vicente Guaita, who was back after a thigh problem.

Palace created a chance midway through the first half when Luka Milivojevic found Wilfried Zaha from a short corner and he picked out Gary Cahill, but the defender blazed over on the volley.

In the 36th minute Roy Hodgson’s side moved the ball well, which provided space for right-back Joel Ward and his cross found James McArthur, but he headed over from inside the six-yard area.

Before the first half ended there was an exchange of words between Zaha and Burnley assistant Ian Woan, with the former telling the opposition coach to “sit down” which added extra spice to proceedings after the break.

The video assistant referee (VAR) was required early on in the second period but Jordan Ayew avoided a red card for catching Josh Brownhill with his arm.

Referee Simon Hooper showed the first yellow card of the evening to James Tarkowski and James McCarthy followed him into the book three minutes later for a challenge on McNeil.

It would prove costly for the Eagles as Burnley took the lead in the 62nd minute when Westwood’s free-kick found captain Mee, and he stooped low to head home from 14 yards.

Guaita would have been disappointed after getting a hand to the effort, but the ball hit the post and rolled in to give the Clarets defender his first goal since January 2017.

Palace, who enjoyed the better of the game after the break, upped the ante and Andros Townsend, Zaha and Ayew all had efforts, but the visitors, aided by Mee’s heroics, stood firm to make it back-to-back 1-0 wins.