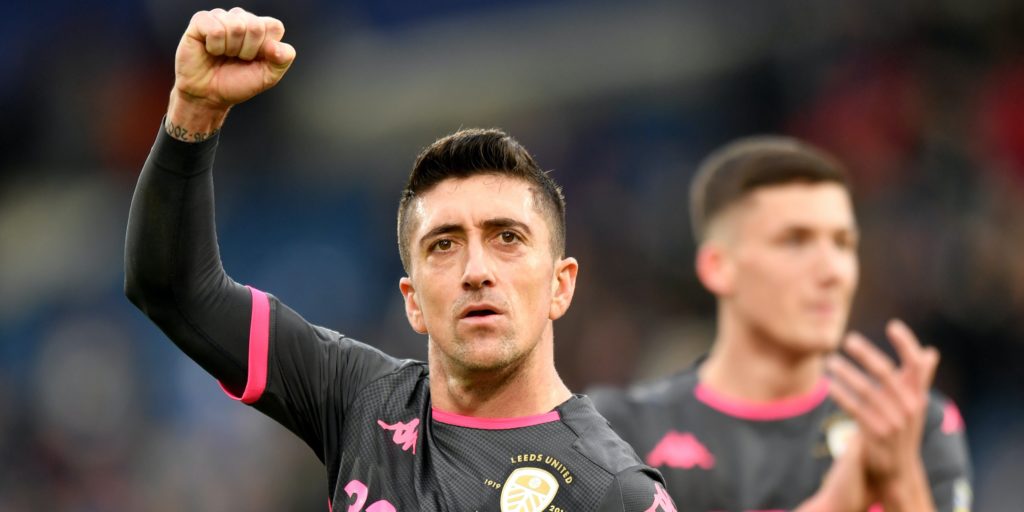 Pablo Hernandez says helping Leeds return to the Premier League this season would mark the high point of his career.

The former Valencia and Swansea midfielder is hoping to be fit to play another key role when Leeds bid to extend their lead at the top of the Sky Bet Championship against Luton at Elland Road on Tuesday.

“I’ve been very happy here since my first day in Leeds,” the 35-year-old Spaniard said. “When I came to Leeds four years ago I knew I came to a big club.

“I knew some things about them. I saw them when they played Valencia in the (2001 Champions League) semi-finals, but when I arrived I was surprised because they were bigger than I thought.

“Yes for me, to go to the Premier League with this club, if we achieve this, it will be the best trophy for me in my career.

“If I can go to the Premier League with Leeds United, it is my dream and I’ll try to push 100 per cent everyday to help this team to achieve that.”

Hernandez was a game-changer in Saturday’s crucial home win against promotion rivals Fulham, transforming Leeds’ fortunes after stepping off the bench at half-time.

He had missed the previous week’s defeat at Cardiff due to an ongoing hamstring problem, but feels he is edging towards full fitness.

“I hope so yes,” he said. “We need to manage this situation well, we need to see each day what happens and see what my feeling is.

“But I think I’m ready in the next few days to be ready and be 100 per cent fit.

“It’s been frustrating the last few weeks because after the break, after a long period with no games, I want to play, I want to help the team.

“But I have experience in this situation and I know these things can happen and I need to manage it well, not just me, I need to manage this with the medical staff and the manager, everybody.”

Luton, second bottom and fighting for survival, have lost only one of their last eight league games and Leeds need no reminding of the possible perils that lie in wait.

Marcelo Bielsa’s side are eight points clear of third-placed Brentford, but squandered a healthy advantage in the race for a top-two finish last season before their promotion push ended in play-off disappointment.

“If we play our football, if we don’t lose our identity or spirit and we play like we have most of the season, we have a good chance,” Hernandez added.

“But we know, we talked after the Fulham game that this is a difficult game and we need to be focused 100 per cent.”