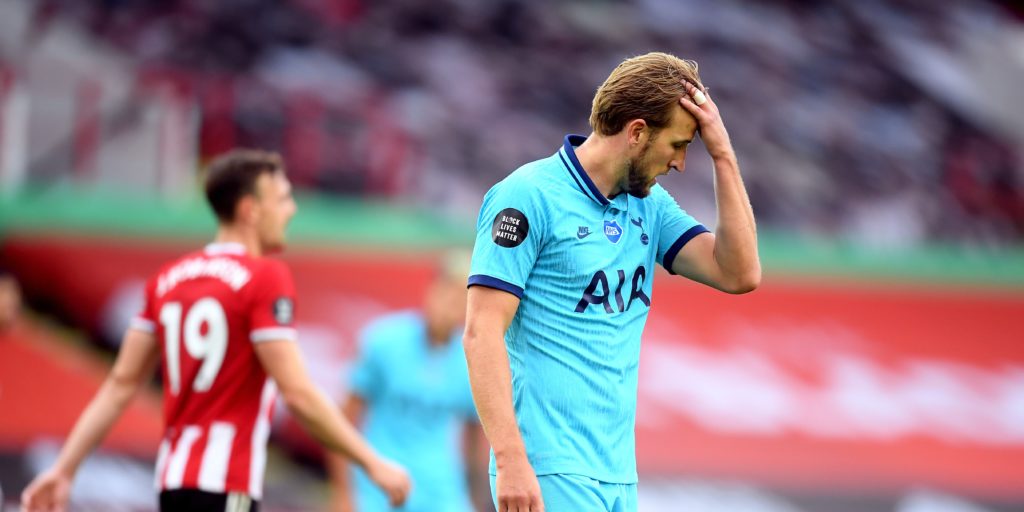 The London club are now seven points behind Wolves and Manchester United with six games to play.

Tottenham’s Champions League hopes were left in tatters after a 3-1 defeat at Sheffield United that will be remembered for one of the most controversial VAR decisions of the season.

Spurs are now seven points behind Wolves and Manchester United with six games to play and looking out of the race after Sander Berge, Lys Mousset and Oli McBurnie goals gave the Blades their first win since the restart.

But that is not the main story as Jose Mourinho’s men were denied a quickfire response to the Blades’ opener by a VAR call that again highlights the questionable handball rule.

Harry Kane slotted home, but VAR official Michael Oliver ruled Lucas Moura had handled the ball in the build-up, having been fouled and the goal was chalked off, leaving Spurs enraged.

They let that affect them and struggled for a way back into the game, with Mousset and McBurnie adding goals for Sheffield United in the second half before Kane did eventually get on the scoresheet.

That leaves Mourinho’s men realistically looking at the Europa League as their only way into Europe next season and even that is not in the bag.

The Blades, who had taken one point from their first three games since the restart, have reignited their own European ambitions with the win and climb above their visitors into seventh, with Spurs languishing in ninth.

Mourinho’s men had been the better side in the opening 30 minutes, but struggled to turn their dominance into chances.

They would have wanted the ball to fall to anyone but Moussa Sissoko on the edge of the area as the Frenchman failed to make proper contact and shot straight at Dean Henderson.

Mourinho’s side had been in control at the back but found themselves behind in the 31st minute.

The Blades found space down the left and overlapping centre-back Chris Basham teed up Berge, who found the bottom corner from eight yards out for his first goal for the club.

Spurs thought they had levelled inside two minutes as Kane rolled home after a loose ball landed at his feet, only for VAR to get involved.

In the build-up to the goal, Moura was brought to the ground and John Egan’s clearance crashed into the shoulder of the Spurs forward, with the ball then rolling to Kane.

But VAR official Oliver ruled that the Brazilian had grazed the ball with his hand as he was falling and the goal was ruled out, leaving Mourinho and Spurs enraged.

Their mood only good worse soon after as Oliver Norwood, less than 90 seconds after picking up a yellow card, clearly raised a hand against Son Heung-min but went unpunished.

Spurs were knocked off their stride by their sense of injustice and were unable to regain their intensity.

They were completely outplayed and outworked by the Blades in the second half as Wilder’s men found their verve that made them so good before the season’s suspension.

Mousset gave them breathing space in the 69th minute as Ben Osborn and Enda Stevens combined well down the left, with Stevens cutting back for the striker to tap in.

Tottenham’s defence was cut open for a third time in the 84th minute, this time on the right as Berge breezed past Son and crossing for McBurnie to drill home from close range.

Kane did find the net in the 90th minute as he poked home from Son’s centre, but it was too late to matter.