Bruno Fernandes at the double as Manchester United cruise in Brighton 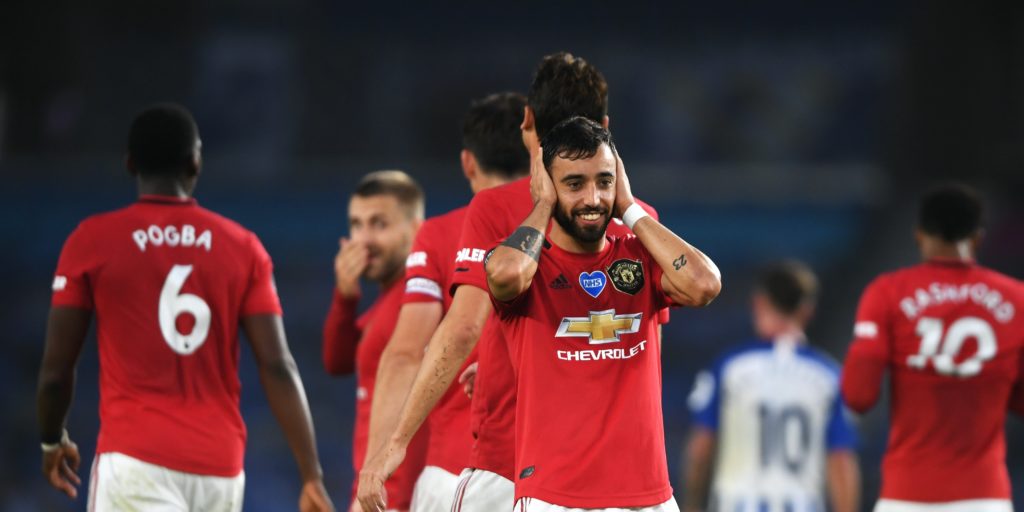 The Portuguese followed up Mason Greenwood’s opener with a brace to boost the Red Devils into fifth place.

Bruno Fernandes continued his fine start to life at Manchester United as he hit a brace in a comfortable Premier League win at Brighton.

The 25-year-old January signing shone in a 3-0 win, scoring in either half after Mason Greenwood had set the ball rolling.

United had lost on their previous two Premier League matches at the Amex Stadium but set that right in style against a Brighton side surprisingly out of sorts until it was too late.

The hosts had beaten Arsenal and held Leicester to a draw since the restart but were never at the races here.

Fernandes had already come inches away from breaking the deadlock, cracking a post after being slipped in by Paul Pogba, whose shot from the rebound was deflected behind.

Greenwood would be the one to open the scoring, breaking inside from the right and outfoxing his marker before firing in his sixth Premier League goal of the campaign.

Fernandes would soon regain his spotlight, curling a free-kick over before doubling United’s lead, turning home from the edge of the box on the half-hour mark.

There was some controversy as the ball appeared to go out of play earlier in the move but the strike stood.
Brighton boss Graham Potter responded by introducing Neal Maupay and Leandro Trossard for the second half.

It made no difference to the encounter, however, as United hit their third less than five minute after the restart.

His deep cross was finished emphatically by Fernandes, giving Mat Ryan no chance.

Brighton finally showed some spark on the hour, Trossard angling an effort wide after a clever free-kick set him free in the United box.

Fernandes was withdrawn just four minutes later, manager Ole Gunnar Solskjaer taking no risks with the amount of football on the horizon.

Brandon Williams was introduced at the same time as Solskjaer made three changes, the young left-back almost making an immediate impact only for his header to be blocked behind.

Having had almost nothing to do, David De Gea made a fine one-handed stop to tip Aaron Connolly’s shot behind – with Trossard shooting inches wide moments later.

Brighton continued to pile on pressure, De Gea with another smart stop to deny Maupay.

There would be no consolation, however, as United extended their unbeaten run to 15 games and closed back up on the top four.