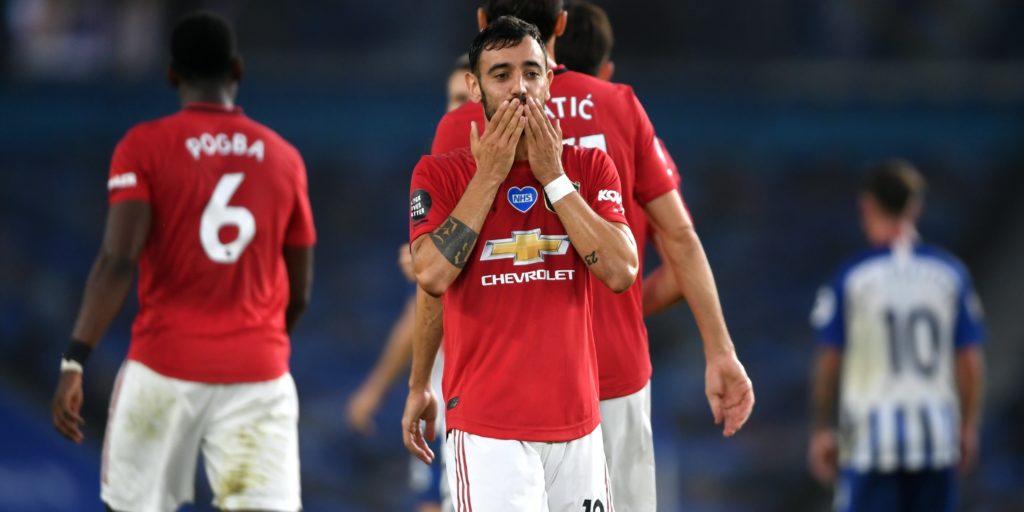 Bruno Fernandes believes it is not fair on his Manchester United team-mates for he and Paul Pogba to claim all the plaudits following a routine 3-0 victory at Brighton on Tuesday evening.

The Portugal international has shone since moving to Old Trafford from Sporting Lisbon during the January transfer window, scoring five goals and registering three assists in eight Premier League appearances.

Two of those goals came either side of the break at the Amex Stadium in another impressive display by the Portuguese as United boosted their Champions League hopes, Mason Greenwood having opened the scoring on the south coast.

The three-month enforced break due to the coronavirus pandemic has helped the Red Devils, with Pogba returning from injury to join Fernandes in midfield and their relationship on the pitch has got fans and pundits purring.

However, when asked how excited he was about forging a relationship in midfield with Pogba, Fernandes said: “Paul is an amazing player but I don’t want to talk too much about me and Paul because it is not fair enough on the other team-mates.

“Of course Paul has such good qualities and is so important for us and I think we can combine together, we have qualities and we can play together, but also we know we have some team-mates who can do very well when we are out. I think it’s not fair on the other guys if we talk just about me and Paul.”

On his performance, the 25-year-old added: “I was lucky for the first goal but also the keeper was lucky for my first shot – the ball hit the post! So I think I am happy.

“It was amazing. But it was a good job from Paul. In the first goal, the ball came back for me, he knows I will be there to shoot. And the second goal was an amazing assist from Mason, an amazing pass, and I did a good shot.

“Of course I am really happy for my goals, but I’m more happy for the result because the team deserves this and we are fighting for the place in the Champions League and we know we can achieve this.”

Red Devils boss Ole Gunnar Solskjaer admitted Greenwood’s goal was one he would have been proud of.

Solskjaer said: “Yes, definitely. He has a knack of that. He can go inside, he can go outside, he’s just as good with his right foot as his left foot. He’s developing into a fine player.

“He played fantastically. He is a young kid and a special kid. We know when he gets face up, looking forward, it is dangerous. But then I thought his hold-up play and his general link-up play today was great.”

Asked about Fernandes’ second goal, Solskjaer said: “Great pass by Nemanja, great cross by Mason and fantastically finished by Bruno. Very, very happy, with all the goals to be fair.”

Brighton head coach Graham Potter had no complaints about the result.

“I think we played against a really good side tonight to be honest,” he said. “Congratulations to Manchester United – they were the better team. I think they had some real good quality.

“I think we stuck at it, and I thought our response in the second half especially was really really good, maybe deserved a goal.

“But overall the better team won. We’ll take the positives from the game on to Saturday (when Brighton are at Norwich).”