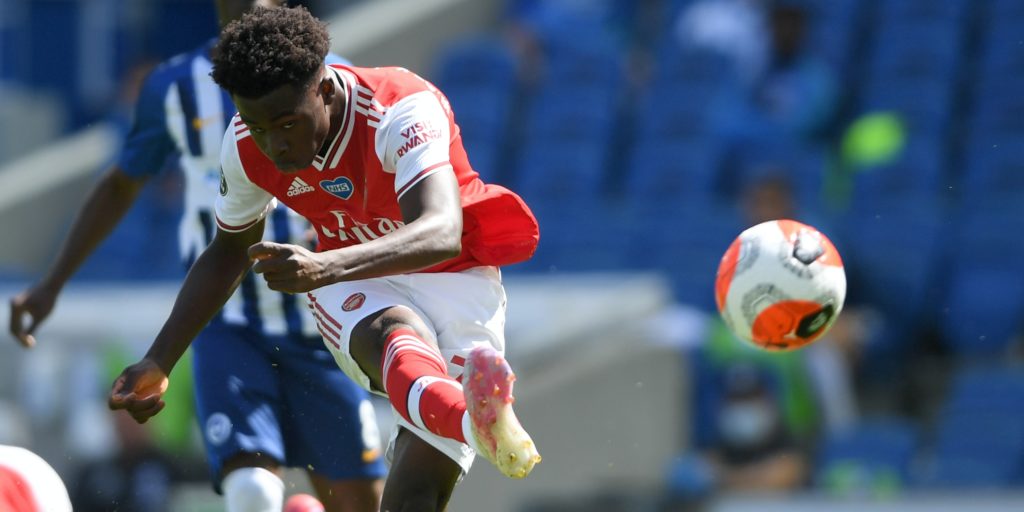 Saka was the target of reported interest from Liverpool and Borussia Dortmund.

Arsenal teenager Bukayo Saka has signed a new long-term contract with the club.

The 18-year-old, who came through the club’s academy, has made a major impact during the current season after making his debut in the Europa League in 2018.

“He has impressed me with his work ethic and attitude to learn and adapt, and it has paid off in his performances. I am excited to continue working with him to develop him further, and for him to help us achieve our goals.”

Saka has continued to impress, predominantly in a wing-back role, since he made his Premier League debut at the age of 17 in the 4-1 win over Fulham last season.

The Gunners were under increasing pressure to tie him to the Emirates Stadium following reported interest from Liverpool and Borussia Dortmund.

Gunners technical director Edu said: “This is something everyone involved wanted to happen and we are delighted that Bukayo has signed a new long-term contract.

“He’s making great progress and is one of a number of young players who have developed through our academy. This is so important for us as we move forward as a club.”

Meanwhile, Arsenal have responded after Saint-Etienne accused the Premier League club of imposing “unacceptable sports and financial conditions” during negotiations over William Saliba extending his loan with the French side.

The defender will now return to England after no agreement could be reached between the teams over the centre-back remaining in France to allow him to play in the French Cup final on July 24.

On Tuesday, a club statement from Saint-Etienne read: “ASSE, which simply wanted the extension of the initial loan until July 24, could not find an agreement in the evening with Arsenal to allow the defender to properly prepare and play this meeting, the English club imposing absolutely unacceptable sports and financial conditions.”

Arteta, speaking ahead of the visit of Norwich on Wednesday, had admitted he would like the teenager to continue his development by playing in the final against Paris Saint-Germain.

But Arsenal have insisted they are unhappy with the training plan put in place for Saliba by the Ligue 1 side after he missed three months of the season with a broken foot.

A club statement read: “Throughout our discussions with Saint-Etienne, our aim has been to protect the welfare of William Saliba as well as the interests of Arsenal FC, while honouring the terms of the loan.

“Despite the loan ending on June 30, we were willing to find a way for William to play in the [French] cup final on July 24, despite having no contractual obligation to do so.

“As William is returning from injury, we asked that Saint-Etienne follow a clear training plan with William in close collaboration with us, to ensure he is fully fit for the start of next season.

“To our surprise we were unable to reach agreement to this plan which was proposed by our medical experts, and we are simply not prepared to risk the welfare of an Arsenal player.

“While it was not our primary concern, and ultimately not relevant as our training plan was not accepted, we also expected not to be financially disadvantaged by extending the loan. This was also not acceptable to Saint-Etienne.

“We know this is a disappointment for William but he understands we are working to protect his long-term interests and those of Arsenal.”

Saliba will now return to the Emirates, but will be unable to feature for the Gunners during the remainder of the 2019-20 season.