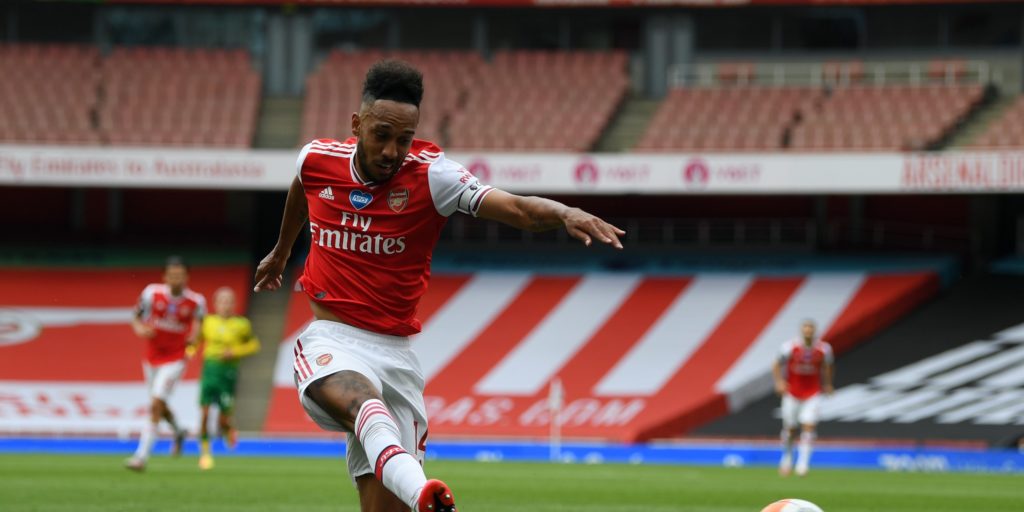 The Gabon striker scored his 50th Premier League goal in just his 79th Gunners appearance against Norwich on Wednesday.

Mikel Arteta is hopeful captain Pierre-Emerick Aubameyang can score another 100 goals for Arsenal after he reached his Premier League half-century in a fine win over struggling Norwich.

The Gunners ran out comfortable winners as Aubameyang was gifted two goals as well as laying on Granit Xhaka’s first of the season before Cedric Soares marked his debut with the last in a 4-0 romp.

Aubameyang’s first, coming after he was gifted possession by Norwich goalkeeper Tim Krul, saw him reach 50 Premier League goals in 79 appearances – making him the fastest Arsenal player to make it to the landmark.

Speaking after the win, Gunners boss Arteta praised Aubameyang and challenged him to keep his scoring feats coming.

“A player that is able to score as many goals as he has done in that short space of time tells you everything about the importance that he has for us,” Arteta said of his skipper.

“Players that can make the difference in any moment in the game every three days in competitions. That is a big task and he has done that at different clubs.

“What he has achieved today to be the fastest to score 50 in the whole history of this club tells you everything about his mentality and the way he works every day.”

Aubameyang has just a year to run on his Emirates Stadium contract but, while Arteta insists negotiations do not involve him, he feels the Gabon international is keen to stay put.

“He is willing to stay with us,” added Arteta. “He is really happy where he is.

“He can see what we are trying to do and hopefully he can evolve as well some parts of his game he might feel he can improve. We are pushing him every day.

“I leave that to the football club and the senior people that finalise the contracts.

“Auba knows really well what my thoughts are towards him and the project that I want to create, and how much he is part of that. And after that it is not in my hands.”

Bottom club Norwich have lost all four of their Premier League games since the restart.

They showed signs of an unlikely comeback at the start of the second half but, after substitute Josip Drmic passed straight to Aubameyang to fire in his second of the night, the writing was on the wall.

Manager Daniel Farke refused to take any positives from the game as relegation back to the Sky Bet Championship now looms large.

“The first and third goals, we invited them in. You cannot do that in key moments of the game. They punished us. We made too many mistakes,” he said.

“After a 4-0 defeat I am not willing to give any fighting messages. We have to focus on our mistakes and put them right.

“We never give up, but we have always been honest and realistic. As long as we have a chance, we keep going.”