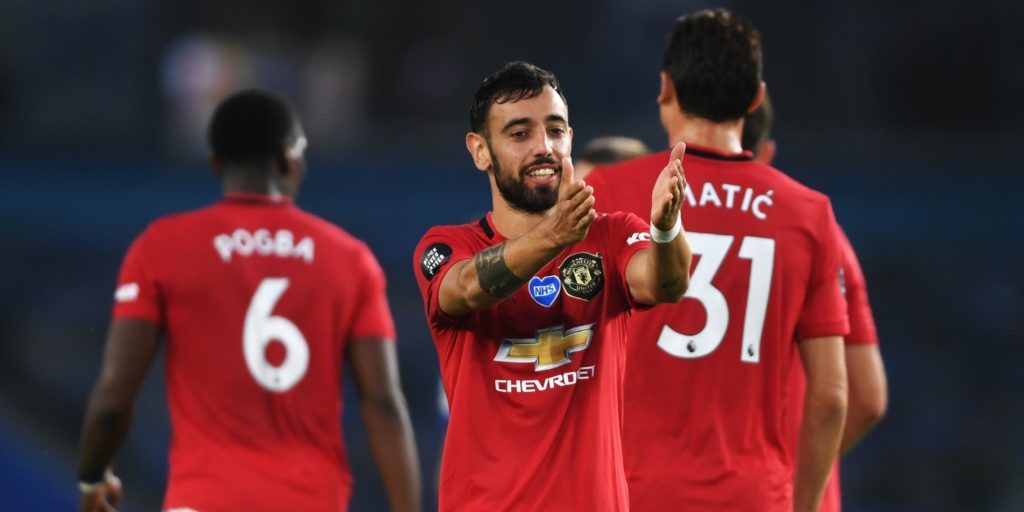 The midfielder scored twice in the Manchester United’s win over Brighton.

Victor Lindelof believes the arrival of Bruno Fernandes has brought a new level of creativity to Manchester United.

The January signing from Sporting Lisbon shone once again on Tuesday night, scoring twice in a 3-0 win at Brighton as United moved back up to fifth in the table.

Mason Greenwood opened the scoring at the Amex Stadium before Fernandes took the spotlight with two fine finishes of his own.

The 25-year-old has now notched five goals in just eight Premier League appearances and has brought a higher level of control when Ole Gunnar Solskjaer’s side are in possession.

“He’s been great ever since he signed,” defender Lindelof told manutd.com. “Straightaway he showed his quality and he came in and wanted the ball and created a lot of chances for us. So he’s been brilliant and he can keep improving and keep doing the same things.

“We have some really good players up there. I think once again they showed what they can do on the pitch and then when we keep the ball like that they can control the game for us.

“So it’s quite nice to watch them play football.”

The comfortable victory on the south coast means United are unbeaten in their last 15 games across all competitions, with Lindelof insisting the team have their tails up.

Asked if the current run was good for confidence, the Sweden international replied: “Yes, of course.

“I think we show it every time we walk on the pitch now, what a team we can be and what type of football we can play.

“We controlled the game throughout the 90 minutes and performed some really, really good football out there, so I’m very, very happy.”

Brighton looked better towards the end of the game but the fixture was over as a contest by that point.

Defender Dan Burn was keen to take any positives as the Seagulls prepare to travel to bottom club Norwich at the weekend.

“It was a learning curve, but we’ve beaten Arsenal and we’ve drawn with Leicester so I think we need to stay confident,” he said.

“We have got a big game on Saturday at Norwich, so we need to put this game to bed and move on.

“I think there are positives to take from the game, but if you look at the quality they had and the way they finished off the counter-attacks, they deserved the win.”