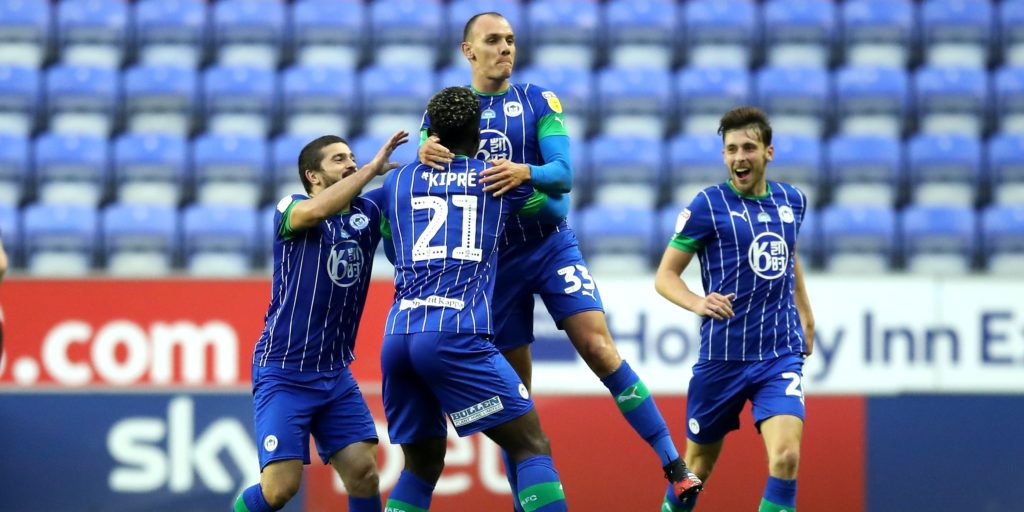 Wigan made it nine matches unbeaten, and seven clean sheets in a row, with a 3-0 thumping of Sky Bet Championship strugglers Stoke.

Wigan themselves have spent most of the season deep in a relegation battle, but their remarkable recent form has lifted them to the lofty heights of 14th, eight points clear of the drop zone.

Despite dominating for pretty much the whole game, Wigan had to wait 40 minutes to open the scoring, through Kieran Dowell.

And after Jamal Lowe was denied by the crossbar shortly after the restart, two more goals inside three minutes from substitute Kal Naismith gave the scoreline a far more accurate look.

Stoke were poor throughout and they threw away the only real chance that came their way early on when Nathan Collins somehow put a free header well wide of David Marshall’s goal.

Wigan came flying out of the blocks, looking every inch a side brimming with confidence.

Kieffer Moore almost found himself in, only for Jack Butland to come racing off his line in a flash to smother.

Lowe dragged a shot just wide of the near post before Nathan Byrne’s cross only just eluded Moore at the near post.

The visitors then showed themselves for the first time and really ought to have taken the lead.

Sam Vokes, a Wales international colleague of Moore, looked a likely scorer before his header was palmed away by Marshall.

The Scotland number one was powerless moments later as another fantastic cross found its way into the box, only for Collins to somehow plant a totally free header, from bang in front of goal, wide of the target.

Boosted by the let-off, Wigan regained control and it took good saves from Butland to keep out efforts from Joe Williams and Sam Morsy.

The home side were given a scare when former winger James McClean got himself a yard, only to smash the ball into the empty stand behind the goal.

But Wigan ended the half on top and nosed in front five minutes before the interval.

Everton loanee Dowell cut in from the right and his shot went in off the body of Butland.

It was almost 2-0 within a minute, with substitute Naismith, on for the injured Michael Jacobs, seeing a dipping volley tipped round the post by the goalkeeper.

And the visitors were relieved to hear the half-time whistle after Dowell swung his left foot and saw the effort fizz just over the top.

Wigan picked up where they had left off after the break and they ought to have doubled their lead within 10 minutes of the restart.

A fantastic right-wing cross from Naismith found Lowe unmarked at the far post, but, from all of three yards, the forward somehow contrived to fire against the top of the bar and over.

Thankfully for the home side, it did not prove too costly, with Naismith scoring twice in the space of three minutes to secure the points.

First he stabbed the ball home from a yard after Butland could not cut out Lowe’s cross.

Then, midway through the second half, the former Rangers and Portsmouth man struck a fantastic 25-yard effort that Butland could not get anywhere near.