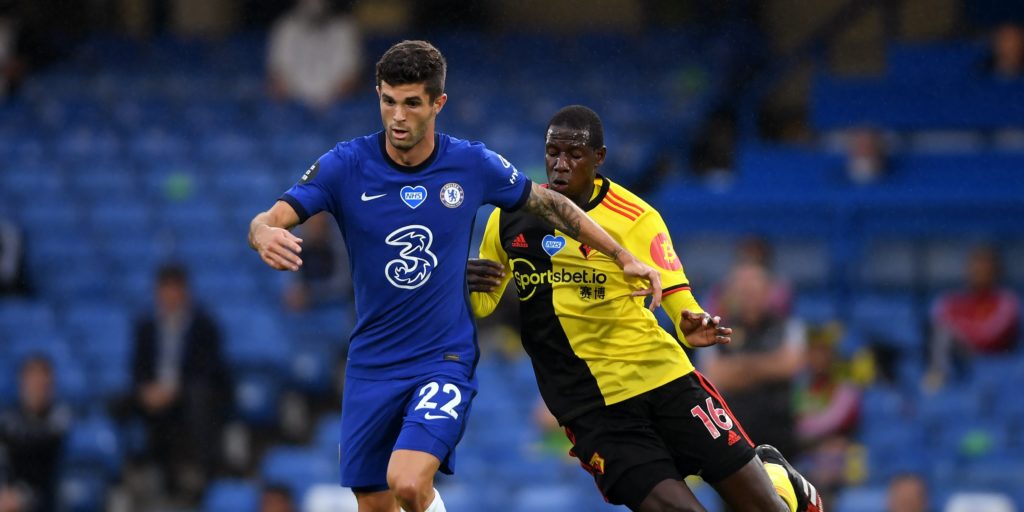 Frank Lampard believes Christian Pulisic is ready to reach his full potential now he has settled into Premier League life.

Pulisic endured a testing middle third of his debut campaign in England due to a niggling hip complaint.

But the 21-year-old has fired into full flow since the league’s resumption, and starred again in Chelsea’s comprehensive 3-0 victory over Watford on Saturday night.

The ex-Dortmund forward is already a major threat to top-flight defences, but Lampard has now tipped the USA star to keep on getting better and better.

“I didn’t have an exact expectation for him, when he came at the start of the season he hadn’t had a break and needed to get himself acclimatised to the league,” said Lampard.

“It’s physical, and tough for even some of the greatest players we’ve seen come to this league, in the beginning.

“He got to grips with that pretty quickly, he was playing very well but then got injured at the start of January and was injured until the restart.

“But what he looks now, he’s sharp and hungry, and his quality is there for everyone to see at the moment.

“He’s going past players, he’s moving at pace, he always works very hard for the team in all senses, to be fair. So I’m really happy for him.

“Considering his age, considering what could be coming from him, then I’m very, very pleased.

“We’ve got ourselves a very good player, and he’ll get even better.”

The Blues hit back from Wednesday’s galling 3-2 loss at West Ham to jump straight back into the top four, just hours after being temporarily dislodged by Manchester United.

Kepa Arrizabalaga pulled off a crucial late save to deny Danny Welbeck a goal that would have teed up a nervy finish for the Blues.

And Chelsea boss Lampard hailed the Spaniard for preserving the clean sheet.

“It was important and I am pleased for him and the back four in front of him as well, because I thought we defended pretty well when we needed to,” said Lampard.

“The moment was slipped and they got in, but he made a really good save.

“That’s what you want from your goalkeeper, you want them to make those saves and stay alert.

“It will be good for his confidence with the clean sheet as well.”

Watford slipped to a third-straight defeat, to leave the Hornets hovering just above the relegation zone, with boss Nigel Pearson challenging his squad to reject any fears despite their plight.

“Only we can make sure that we stay in the Premier League,” said Pearson.

“We’ve had a really disappointing run of games where we’ve not collected points.

“But we’re still in contact and we still have opportunities, and that’s the important thing.

“We’ve got to embrace the challenge. There’s no point having any fear in terms of the situation, we need to back ourselves.”