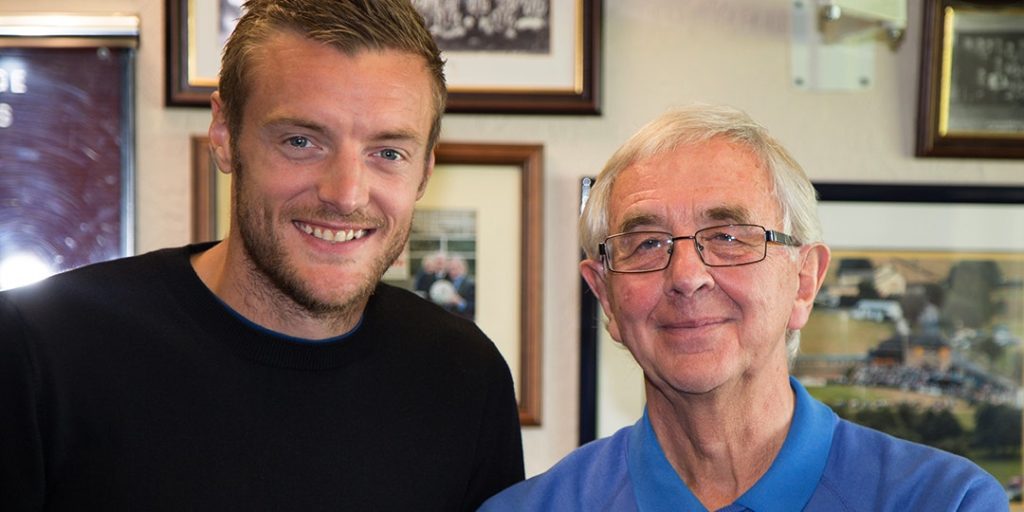 The 33-year-old began his career with Stocksbridge Park Steels.

Jamie Vardy has been hailed as a “total one-off” by his former non-league chairman after firing his way into the Premier League’s 100-goal club.

Leicester striker Vardy reached another milestone of a remarkable career with the first of his two strikes during Saturday’s 3-0 win over Crystal Palace.

The 33-year-old, who started out at lowly Stocksbridge Park Steels after being released by boyhood club Sheffield Wednesday, became only the 29th player to achieve the feat, doing so in 206 top-flight appearances.

Allen Bethel was Stocksbridge chairman for 38 years before retirement in 2019 and, along with his wife Janet, avidly follows the fortunes of a player he sold to Halifax for an initial GBP 15,000 a decade ago.

“There hasn’t been anyone like him who has come from nowhere, come from non-league into a position like he is now. He’s a total one-off.

“I feel very proud of his achievements. I am a Vardy fan, I always have been.

“All right, there’s some criticism about him but nobody’s perfect.

“He’s moved from stage to stage, he’s taken it in his stride. He’s taken a lot of kickings in his life, people do kick centre-forwards.

“I am very pleased – on behalf of all at the club I now represent indirectly – that he is still at his best.”

Stocksbridge are currently a member of the Northern Premier League Division One South East, the eighth tier of English football.

After leaving Bracken Moor – the South Yorkshire club’s stadium which now has a stand named in his honour – in 2010, Vardy continued his red-hot form at Halifax.

He eventually became the first GBP 1million signing from a non-league club when he moved to the King Power Stadium from Fleetwood in the summer of 2012, lifting the Premier League title with the Foxes just four years later.

Bethel believes the top-flight’s 21-goal leading scorer is deservedly reaping the rewards of his determination to play professionally.

“He’s done it on his own. He was football-mad; he must have been because he never missed training, did all the hard work,” said Bethel.

“He was a phenomenal player who could stand being kicked and get up. He was very strong-willed.

“Occasionally – and I mean very occasionally – he flipped but on the other hand he’d just been kicked for about half an hour.

“He was the life and soul of the party.”

While Vardy has continued to thrive at club level with Champions League-chasing Leicester, his fleeting international career has all but ended.

He scored seven times in 26 appearances for his country but effectively called time on his international career following the 2018 World Cup in Russia.

Bethel thinks Vardy still has plenty to offer Three Lions boss Gareth Southgate and is saddened that he is unlikely to win further caps.

“I don’t think he wants to play for England now and England probably don’t want him to play,” said Bethel.

“I don’t think the current manager of England will pick him. And I think that’s sad because he’s still as good as anything – if you give him the ball, he’ll score.

“He still is the same figure and he’s still sharp over the first five, 10 yards, and he’s still energetic at the end of the match, so he’s super fit.”