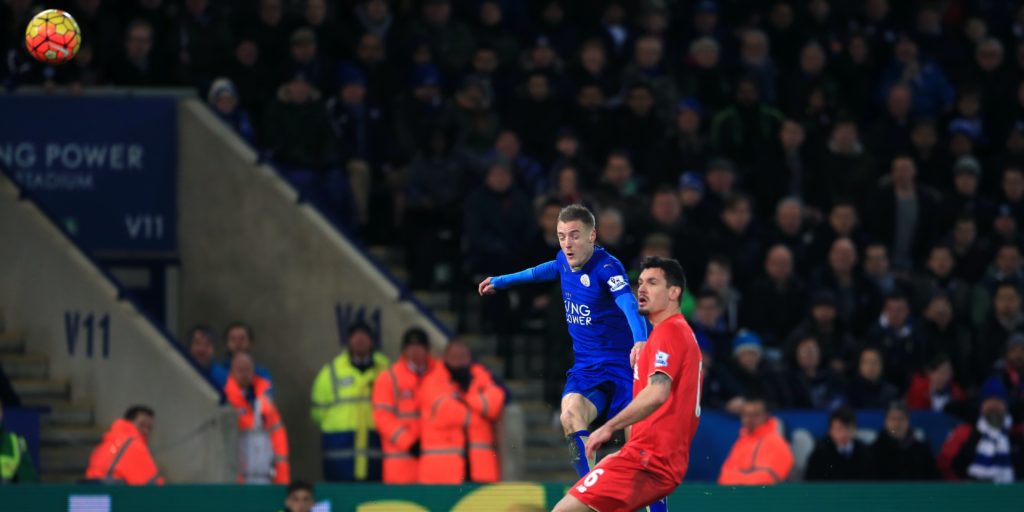 The striker ended a long wait to complete the milestone.

Here, the PA news agency looks at five of his best top-flight strikes for the Foxes.

The striker scored his first Premier League goal in the Foxes’ remarkable comeback win over United. They were trailing 3-1 before quickfire goals from David Nugent and Esteban Cambiasso got them back on level terms. Cambiasso then slipped Vardy through to slot a fourth past David De Gea and Leonardo Ulloa’s second goal of the game completed the win.

Vardy made history when he broke Ruud Van Nistelrooy’s record of scoring in consecutive Premier League games. He had already netted in 10 straight outings before United’s visit and opened the scoring in the first half. Christian Fuchs’ pass set Vardy through and his low finish across De Gea etched his name into the record books.

Perhaps the pick of his 100 goals in a season to remember. Riyad Mahrez’s long pass found Vardy, who allowed the ball to bounce before hitting a stunning dipping volley from 25 yards. A second from close range soon followed and kept Leicester three points clear at the top of the table to put them on course for a famous title success.

The Foxes had fallen behind at The Hawthorns before Vardy and Mahrez combined again. The Algeria international launched a deep ball for Vardy, who had stolen ahead of Craig Dawson. With the ball coming over his shoulder Vardy, on the run, took it first time to find the bottom corner from the edge of the box.

Vardy thrives on being released early and he cashed in again in spectacular style against Bournemouth earlier this season. Ben Chilwell spotted him in space and racing clear of the floundering Chris Mepham. Vardy then produced a brilliant lob on the half-volley from 25 yards which arched over the stranded Aaron Ramsdale and dropped under the bar.