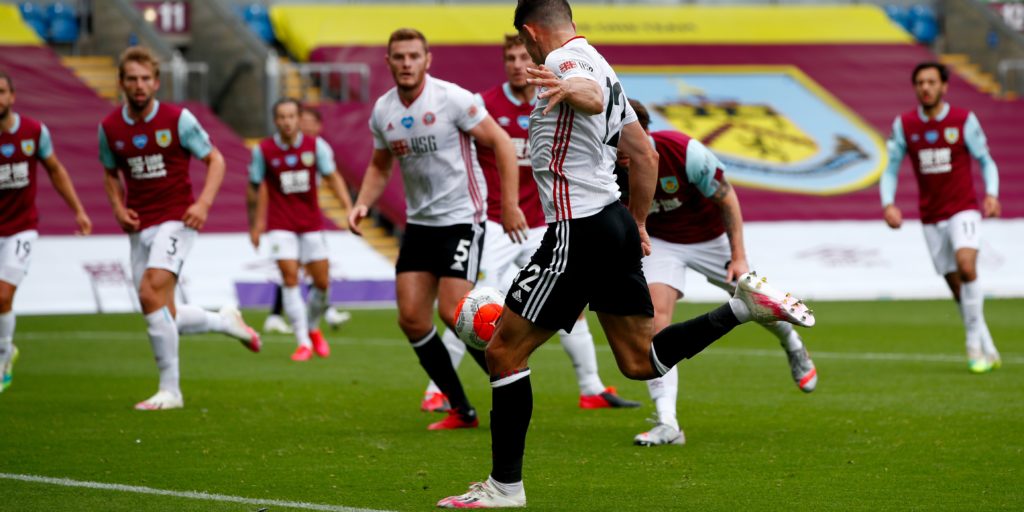 James Tarkowski had given Burnley a first-half lead.

At the start of the season not many would have expected either of these sides to have been on the fringes of the battle for Europa League places, but the intensity and industry that has put them there was on show during a windswept afternoon.

Burnley welcomed back Jay Rodriguez up front and had the welcome sight of Chris Wood, Robbie Brady and Johann Berg Gudmundsson all returning to the bench, but there was a major blow as Ben Mee’s run of 70 straight Premier League starts was ended by a thigh problem.

And without their captain, Burnley found themselves under the cosh for most of the first half.

There was barely a minute on the clock when David McGoldrick’s neat flick found the run of Oli McBurnie but the Scot’s shot was straight at Nick Pope.

The Blades had the ball in the net moments later but Sander Berge’s shot was disallowed due to a foul throw from Jack Robinson, and it might also have been a foul on Pope as well.

At the other end, a neat move between Erik Pieters and Rodriguez released Matej Vydra, but the Czech forward put his shot the wrong side of the post, and United reasserted their control.

Tarkowski had to block Berge’s powerful shot from McBurnie’s pull-back, and United then wanted a penalty for handball when Pieters got his clearance from a corner all wrong, but it survived a VAR check.

Enda Stevens’ shot was deflected behind for a corner before Berge headed over, with the chances piling up for United.

Burnley in contrast could not get anything going with Dwight McNeil struggling to make an impression from the right wing.

Phil Bardsley’s drive swirled in the wind, batted away by Dean Henderson who was grateful to see the ball evade Rodriguez.

But after all United’s pressure, it was Burnley who took the lead three minutes before the break, with Tarkowski poking home after Rodriguez flicked on McNeil’s free-kick from deep.

Knocked by the goal, United struggled to respond early in the second half.

Chris Wilder’s frustration with Ollie Norwood became apparent before the Burnley-born midfielder was replaced by club captain Billy Sharp 10 minutes after the restart, part of a double change as Jack O’Connell came on for Jack Robinson.

Sharp was straight into the fray, and almost met a deflected cross from O’Connell which deceived Pope as it flew dangerously across goal.

Burnley should have added to their lead in the 76th minute when Rodriguez’s powerful strike from distance was only parried by Henderson before McNeil fired wide from the rebound.

And it proved costly as United levelled four minutes later. Sharp was inevitably involved, flicking on Ben Osborn’s pass for Egan to rifle home on the volley at the far post.