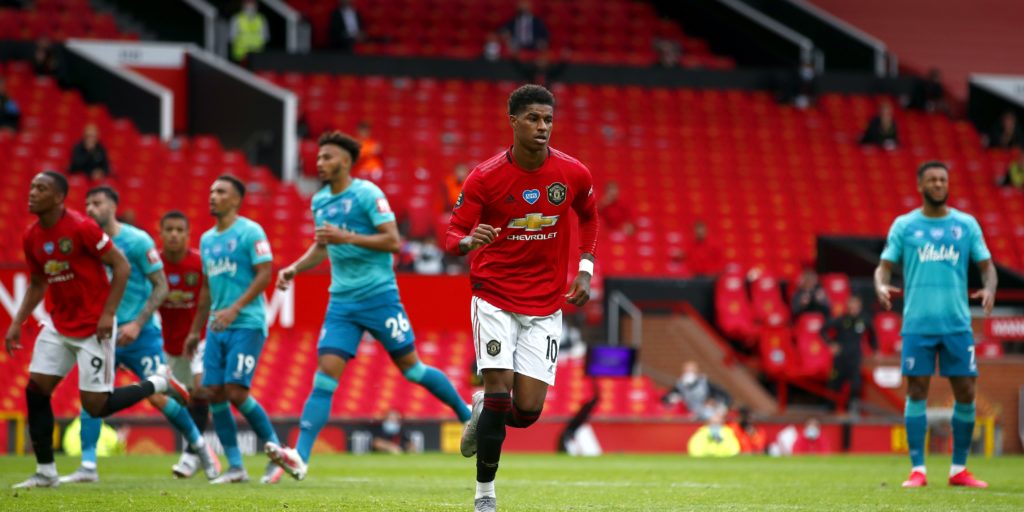 Ole Gunnar Solskjaer’s side have played entertaining football since the start of the year and are unbeaten in 16 matches in all competitions.

Marcus Rashford loves playing up front alongside teenage star Mason Greenwood and Anthony Martial, with the forward excited by the momentum and “massive flood of positivity” around Manchester United right now.

A year that started with alarming losses and fan discontent has transformed into a period of promise, with Ole Gunnar Solskjaer’s side playing entertaining football and unbeaten in 16 matches in all competitions.

FA Cup and Europa League glory remain within reach, as does Champions League qualification having continued their fine form with a 5-2 shellacking of embattled Bournemouth at an empty Old Trafford on Saturday.

Bruno Fernandes’ free-kick wrapped up a win in which the front trio did the damage, with Rashford’s penalty and a sumptuous Martial effort complementing a thumping brace from outstanding 18-year-old Greenwood.

“I just think there’s a massive flood of positivity right now and momentum. For us, we want to keep that going.

“Like today, all three of us scored, Mason scored two. That’s the type of momentum we want to keep going. That’s it, really.

“(Greenwood) has done very well for the whole season. It’s not just these bits he’s been scoring goals.

“He’s been working hard for the team and doing the dirty work, you know the unseen work. He does it so he deserves all the credit that he gets.”

Solskjaer said the sky was the limit for Greenwood ahead of a match in which the teenager produced emphatic finishes to hurt Bournemouth at key times, taking his breakthrough season’s goal tally to 15.

“He’s a fantastic player,” Rashford said. “I’ve watched him before he got to the first team.

“It was never a matter of if was going to play with us, it was just when. When can we get him involved?

“Ole has done a terrific job with him. First of all, he put him in the squad and brought him on against PSG and that for a player, as a first step, it’s huge and it shows that the manager had confidence in him.

“You’ve got no reason not to have confidence in a player like Mason.

“But, for me, I just tell him to keep doing what he’s doing because what he does is score goals, so he doesn’t need to do anything else.

“You know, forget everything whatever people are doing outside, whether it’s praise or negativity.”

While in a prime position to offer advice to fellow academy graduate Greenwood, it is easy overlook the fact that Rashford is still only 22.

The England international took his tally to 20 for the season with Saturday’s penalty against the Cherries – his first goal since being ruled out with a potentially season-ending back injury in January.

Rashford was injured at a tough time individually and collectively, but progress at United has been clear since and the coronavirus suspension allowed him time to recover.

“Firstly, I want to say how blessed I feel to be back healthy,” Rashford added.

“I’ve had this injury before in the past but this time it was quite a bit worse than the ones I’ve had before. It was definitely difficult news to hear.

“I remember doing a few interviews at the beginning of the season and I was saying then that progress has been made we’re continuing to make progress.

“But, you know, it’s easy for me to see progress because I train with the lads every day. I see us getting better day in, day out.

“For the fans, sometimes the only time they get to see it is on matchday.

“You know as well as us that some matchdays they don’t go your way. It can look like there’s no progression, but 100 per cent this team has been progressing since the start of the season.

“The manager has helped us a lot. He’s stuck with us in difficult times and we’ve listened and tried to take on board what he’s saying and what he wants us to deliver on the pitch.

“Where we are now, it’s getting closer to what we picture but there’s still a lot more work to do to be back challenging for the Premier League.”