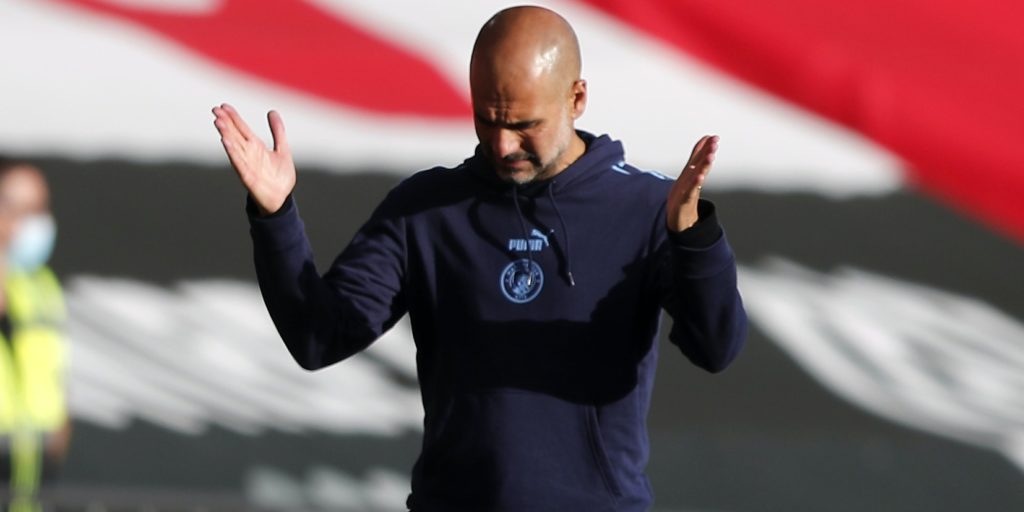 Only Chelsea in the current top eight have lost more games.

Pep Guardiola admits he finds it difficult to understand why his Manchester City side have lost nine Premier League games this season.

A superb long-range effort by Southampton striker Che Adams saw City slip to a 1-0 loss at St Mary’s on Sunday – the first time in over five years they have been defeated in three consecutive away league games.

It is the first such run of Guardiola’s entire managerial career, with Adams taking advantage of Ederson being well off his line to lob in his first-ever Premier League goal on his 25th appearance in the competition.

City rallied but could not find a way past a resolute Southampton defence and an inspired Alex McCarthy between the posts.

The ninth loss of the campaign for Guardiola’s side, fresh off the back of a 4-0 thrashing of newly-crowned champions Liverpool on Thursday, means only Chelsea in the current top eight have lost more.

“In general the games we played are more than good,” he said.

“We play more than good but it is not enough to win the games. We cannot say we are not team who score goals this season.

“We are leading in goals. We create a lot of chances. We are a team who concede less, no team conceded as few chances as us but we lost a lot of games.

“It’s difficult even for me to find a reason why but you have to insist and talk abut the game, the way they play and try to be more, concede as less as possible and up front score.”

Guardiola said he was confident he could address the issues and has belief that his current squad – champions in the previous two seasons – remain good enough to do so.

He also defended Ederson after Saints boss Ralph Hasenhuttl suggested his side had aimed to target the fact the Brazilian often wanders from his line.

“We use our keeper to build up our play,” he added.

“We use our keeper to play better. It gives us a lot. The mistake is part of the game but we didn’t lose for that reason.

Hasenhuttl was pleased to see Adams get off the mark – but was equally complimentary of the striker’s work ethic.

“I think it means a lot to him and also to us,” said Hasenhuttl.

“He worked hard like all the other guys today, otherwise it would not have been possible to get anything.

“I think we knew that if you want to take something off such an opponent you have to run more, fight more, be brave and in the end have a little bit of luck.

“It is usually not possible but you see that if you believe in what you are doing and fight with passion you get something and I’m very proud.

“It seems that everything was prepared for his (Adams’) right moment today. I am very happy for him that he had the right decision in this movement to score.”