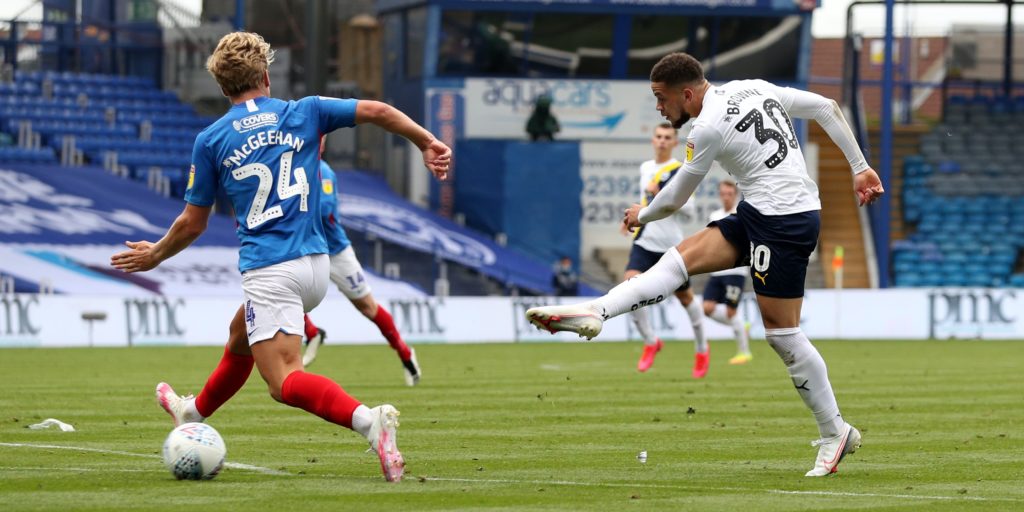 Marcus Browne pounced for Oxford two minutes before half-time to cancel out Republic of Ireland international Ronan Curtis’ 14th goal of the season.

Portsmouth’s wait for a first victory in the play-offs continues after being held to a 1-1 draw at home to Oxford in the first leg of their League One semi-final.

Marcus Browne pounced for Oxford two minutes before half-time to cancel out Republic of Ireland international Ronan Curtis’ 14th goal of the season.

Pompey, who have now gone seven play-off matches without a single win, were cheered on by cardboard cut-outs of more than 850 supporters.

Among the famous faces in the make-shift crowd were Only Fools and Horses actor David Jason and Mr Bean star Rowan Atkinson.

The south coast side, whose only home defeats this season were at the hands of Premier League duo Arsenal and Southampton, came storming out of the starting blocks.

Curtis could have opened the scoring after only six minutes when his drilled shot clattered the base of the post.

The hosts carved another good chance three minutes later from Marcus Harness’ floated free-kick but defender Christian Burgess could not keep his header down.

Pompey had two strong penalty appeals turned down after Oxford defender Rob Dickie first appeared to handle the ball inside his own box before later dragging Burgess to ground.

Kenny Jackett’s men took a deserved lead in the 32nd minute as Curtis found space inside the Oxford penalty area before firing low past goalkeeper Simon Eastwood at his near post.

The goal seemed to spark Oxford into life and in the 38th minute, on-loan Bristol City striker Matty Taylor was inches away from getting on the end of Browne’s cross.

The visitors equalised in the 43rd minute courtesy of Browne’s sixth goal of the season.

Browne picked up the ball 10 yards outside the Portsmouth penalty area before cutting in from the left and steering a right-foot shot beyond the despairing dive of Alex Bass.

Browne continued to be Oxford’s danger-man in the early stages of the second half and 12 minutes after the restart the former West Ham youngster dragged a shot wide from the edge of the penalty area.

James Henry also fired an effort tamely into the arms of goalkeeper Bass in the 66th minute as Karl Robinson’s side tried to impose their authority on the game.

The centre-back tested the reflexes of Eastwood with a downward header from a Harness free-kick, which the Oxford shot-stopper did well to turn past the post.

The two teams will meet again at Oxford’s Kassam Stadium on Monday to decide who progresses to the final at Wembley on July 13, with the tie evenly poised.