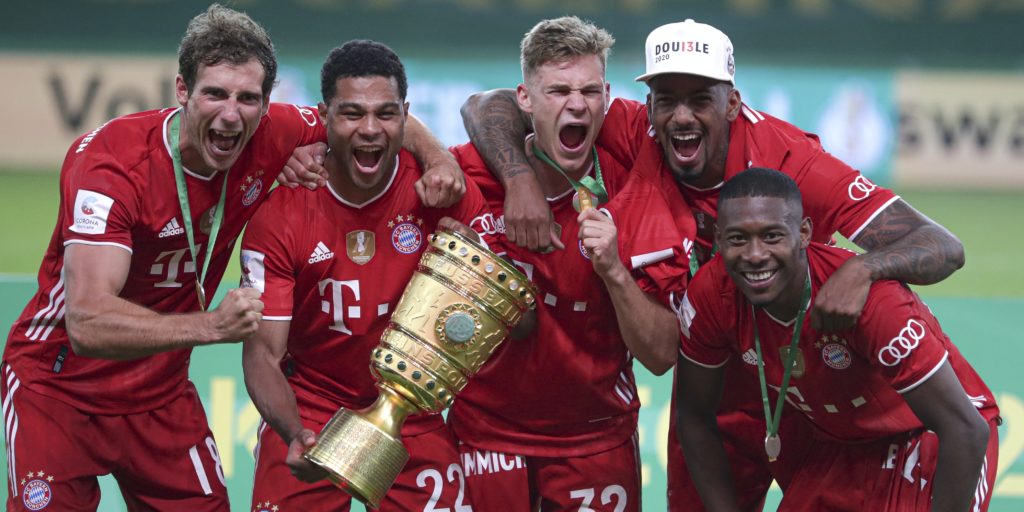 The Poland international took his goal tally in all competitions to 51 with a brace against Bayer Leverkusen.

Robert Lewandowski struck twice as Bayern Munich completed a successive domestic double with a 4-2 victory over Bayer Leverkusen in the German Cup final.

A David Alaba free-kick and Serge Gnabry’s second put Bayern on course for victory in Berlin before Lewandowski took his tally for the season to 50 with a third just before the hour.

Sven Bender gave Leverkusen some hope but Lewandowski’s second in the 89th minute put the result beyond doubt, although Kai Havertz added a penalty in stoppage time.

It was an 11th successive victory for Bayern since German football resumed following the coronavirus outbreak.

They will now hope to go on and make it a treble by winning the Champions League in August. They lead Chelsea 3-0 after the first leg of their last-16 tie.

Juventus took another stride towards a ninth consecutive Serie A title as they moved seven points clear at the top with a resounding 4-1 derby win over Torino.

On what was also a record-breaking night for veteran goalkeeper Gianluigi Buffon, Juve secured victory in the second half with a Cristiano Ronaldo free-kick and a late Koffi Djidji own goal.

Paulo Dybala and Juan Cuadrado had put the hosts 2-0 up inside the opening half-hour at the Allianz Stadium before Andrea Belotti pulled one back from the penalty spot.

It was a memorable occasion for 42-year-old Buffon who, featuring for the first time since December, made a record 648th Serie A appearance, overtaking the previous mark of Paolo Maldini.

Juventus’ victory was made all the sweeter by a 3-0 home defeat later in the day for second-placed Lazio against AC Milan.

Zlatan Ibrahimovic was again on target for Milan, scoring from the spot before the break after Hakan Calhanoglu had opened the scoring. Ante Rebic added a third just before the hour as Milan climbed to sixth and dealt a heavy blow to Lazio’s lingering title hopes.

At the other end of the table, Lecce’s relegation fears increased as they were beaten 4-2 by Sassuolo.

In Spain, Valladolid moved closer to LaLiga survival as a last-gasp Joaquin goal gave them a 1-0 win over Alaves.

Joaquin struck with just two minutes remaining at the Jose Zorrilla Stadium, earning a first win in six and lifting the side 10 points clear of the relegation zone.

Zouhair Feddal equalised 11 minutes from time as Real Betis, who had earlier had a penalty award overturned by VAR, grabbed a 1-1 draw at Celta Vigo. Nolito had opened the scoring for the hosts with a free-kick midway through the first half.

Substitute Fede Vico scored an 86th-minute equaliser as Granada snatched a 2-2 draw in their mid-table battle with Valencia.

Carlos Fernandez had opened the scoring for Granada with a 61st-minute penalty but quickfire replies from Manuel Vallejo and Gonçalo Guedes had turned the game around.