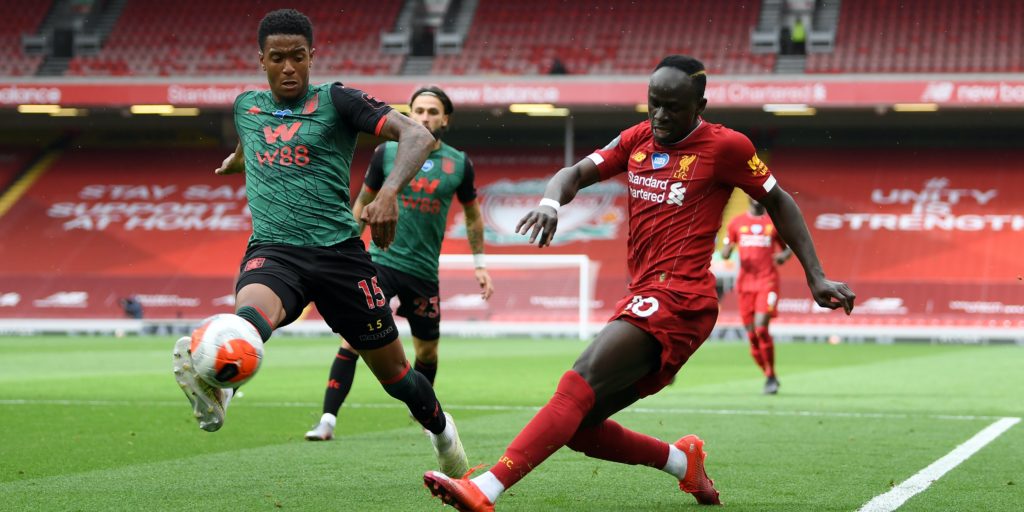 Mane and Curtis Jones scored for Jurgen Klopp’s side.

Sadio Mane’s 50th Anfield strike and a late Curtis Jones goal edged the champions within 11 points of the Premier League century mark as relegation-threatened Aston Villa were left to rue what might have been.

Dean Smith’s side squandered what was the best chance of any visiting team in the last three years to end Liverpool’s unbeaten home run but slipped to a 2-0 defeat which extended the sequence to 57 matches.

After Thursday’s 4-0 defeat at Manchester City, Jurgen Klopp’s title winners were looking to prove that a first championship in 30 years had not dulled their senses – with City’s single-season record of 100 points still in their sights – but they once again struggled to find their fluency.

What transpired was a scrappy, disjointed, low-tempo display in which they did not register a shot of any kind until the 37th minute, with their only two pieces of quality producing goals for Mane and substitute Jones in the final quarter.

Villa, still a point from safety and now without a win in nine matches, had created the better opportunities up to that point but failed to take the openings offered to them.

Klopp made three changes but in no way could that be an excuse for the lack of quality on show from the champions in without doubt their worst 45 minutes of football at Anfield in arguably two years.

What the manager could not have anticipated was how off their game all his players were, with simple passes going astray, first touches bouncing away and a general lack of cohesion pervading all their play.

Aside from an early penalty shout when Mohamed Salah fell in a tangle with Douglas Luiz, it took the hosts until close to half-time to force Pepe Reina into a save, the former Reds goalkeeper comfortably denying the Egyptian at his near post.

Villa, while fairly resolute in their defending, could not have expected to have such an easy ride and out-shot their opponents three to two in the first half despite having just 28 per cent possession.

Unluckily for them, playmaker Jack Grealish appeared to be hampered by an early ankle knock and that affected their success going forward to a degree, but they were offered plenty of opportunity by the slackness of their hosts.

Even after the break Villa continued to create the better chances, with one four-on-two counter-attack seeing Anwar El Ghazi force Alisson Becker into his first real save. Virgil Van Dijk then made up for losing possession to Douglas 10 yards inside his own half by blocking the Brazilian’s shot in the penalty area.

And when Liverpool did finally get behind Villa’s defence there was no-one in the six-yard area to get on the end of Andy Robertson’s cross.

Klopp had seen enough and hooked Origi, Oxlade-Chamberlain and Keita for the three players they had been preferred to: Firmino, Jordan Henderson and Georginio Wijnaldum.

The breakthrough, when it finally arrived, came from three of the original starters, with Trent Alexander-Arnold drilling a low diagonal ball into the feet of Keita, who was given time to turn and cross for Mane to smash home off the underside of the crossbar from close range.

Jones, a Scouser from the club’s academy, celebrated signing a new five-year contract less than 24 hours earlier by smashing home Salah’s headed knockdown in front of the empty Kop.