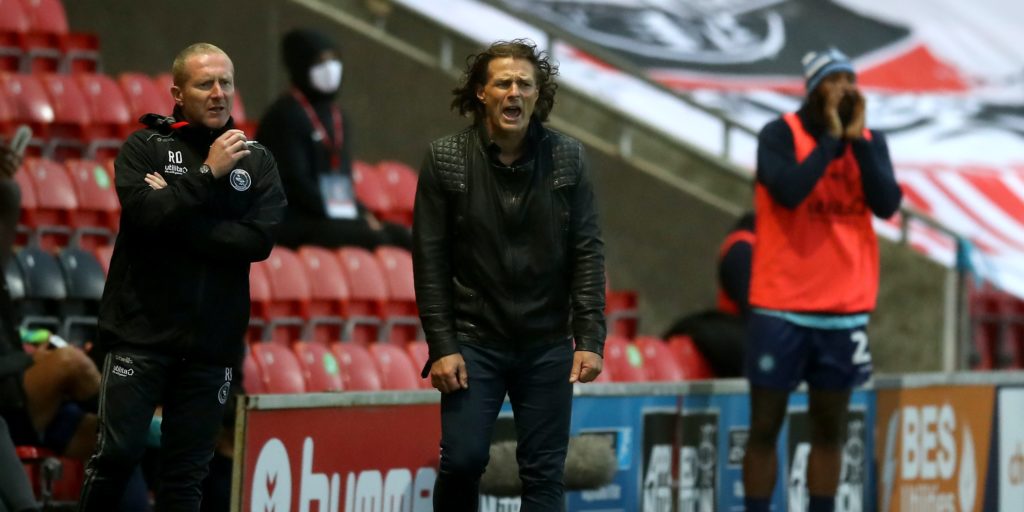 Fleetwood ended the game with nine men on an awful night for the hosts.

Delighted Wycombe boss Gareth Ainsworth remained calm despite his team cruising to a 4-1 victory against Fleetwood in the League One play-off semi-final first leg.

Fleetwood ended the game with nine men on an awful night for the hosts, and now the Chairboys will be firm favourites to progress to the Wembley final.

He said: “Of course this is a great result here but we’ve got to be careful in the second leg (on Monday).

“It’s only half-time in the tie and Fleetwood are a really good side.

“You could see that by the way they kept possession so well even when they’d gone down to 10 men.

“We’ve got to get it right again on Monday and we need to be performing to the same high levels.

“We have to show Fleetwood respect, though.

“We can’t go into the second leg thinking this tie is over and we’re going to Wembley.

“We did put in an excellent all-round effort tonight, though.

“To a man we looked sharp throughout, particularly during what was a crazy first half.

“We have only done half a job so far. We’ll have to be completely focused again from the start on Monday.”

A frenetic opening first half at a blustery Highbury Stadium featured four goals, two penalties – one of which was missed – and a red card for Fleetwood defender Lewie Coyle.

The Chairboys struck first after only 75 seconds through Nnamdi Ofoborh before Ched Evans equalised from the spot.

Fleetwood goalkeeper Alex Cairns then handed Wycombe the lead in the sixth minute when he could only parry Joe Jacobson’s inswinging corner into his own net.

Coyle was sent off after hacking down Jacobson in the box but Cairns saved the subsequent spot-kick.

Wycombe got themselves a third goal deep into first-half stoppage time through David Wheeler.

Alex Samuel then wrapped up Wycombe’s thumping win in the 57th minute, pouncing on another Cairns howler before slotting comfortably home.

Fleetwood’s miserable evening was complete six minutes from time when substitute and leading scorer Paddy Madden was booked for diving in the Wycombe box, and then sent off after being carded again for dissent.

Boss Joey Barton still reckons his team should not be written off yet.

He said: “We’ll be ready on Monday night and we’ll win at Wycombe.

“I don’t know whether it’ll be by enough to get us to Wembley but we’ll be giving it everything.

“They are a good side, they showed that tonight.

“They’re going to be difficult to break down, but we’ll go there with belief and confidence.

“We finished above teams like Sunderland, Ipswich, some big, big clubs.

“We didn’t maximise that tonight but we are still alive in this tie and while there’s a fight to be had, we’ll give it everything we’ve got.”

Fleetwood could also be in trouble from the FA after a red flare was thrown onto the pitch in the 88th minute, apparently by children from outside the stadium.