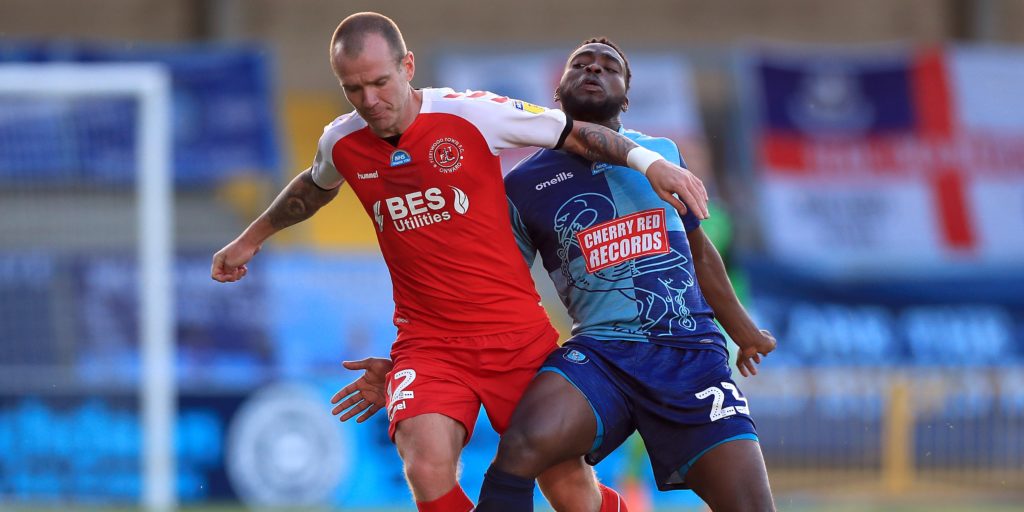 The Chairboys claimed a 6-3 aggregate victory.

Fred Onyedinma scored twice as Wycombe held off a spirited Fleetwood to reach the Sky Bet League One play-off final following a 2-2 draw at Adams Park.

The Chairboys had taken control of the first leg, easing to an emphatic 4-1 victory at Highbury against nine men, and did enough to book their place at Wembley with a 6-3 aggregate success.

Fleetwood took the lead in the 22nd minute after an early period of pressure. The Wycombe defence cleared the ball straight into the path of Danny Andrew and he fired home to offer Joey Barton’s side hope of a stirring comeback.

But Wycombe hit back just after the restart, with Onyedinma capitalising on a defensive mistake to level on the night and put his side firmly back in control.

The visitors regained the lead through Ched Evans’ second penalty of the tie, only for Onyedinma to grab his second goal of the game at the death to seal his side’s passage.

Wycombe will face Oxford in the final on July 13 as they attempt to reach the second tier of English football for the first time in their history.

The visitors started brightly as they looked to overturn the three-goal deficit, with Josh Morris and Andrew both sending efforts over the crossbar.

Just before the first-half drinks break, Andrew found his range, driving the ball low into the net to put Fleetwood in front.

Goalkeeper Alex Cairns, who had made two errors but saved a penalty in the first leg, was almost left red-faced once again. He came off his line to make a clearance, only to find Chairboys midfielder Nnamdi Ofoborh, whose 50-yard effort was pushed wide by the backtracking goalkeeper.

Fleetwood could consider themselves hard done by in the closing stages of the first half after a strike from Barrie McKay appeared to hit defender Anthony Stewart’s arm as he blocked the attempt.

The home side extended their advantage in the tie at the start of the second half. Fleetwood’s towering defender Harry Soutter diverted the ball into Onyedinma’s path and the Nigerian ran onto it and slotted under Cairns.

The game was not level for long, though, with referee Darren Bond awarding Fleetwood another penalty after McKay was brought down by Joe Jacobson.

Shortly after the second drinks break, half-time substitute Adebayo Akinfenwa had a chance to put the tie firmly beyond Fleetwood, but his close-range effort was straight at Cairns.

In the final stages of the match and with Fleetwood going all-out for another goal, Onyedinma scored his second of the game to seal his side’s passage to the final.