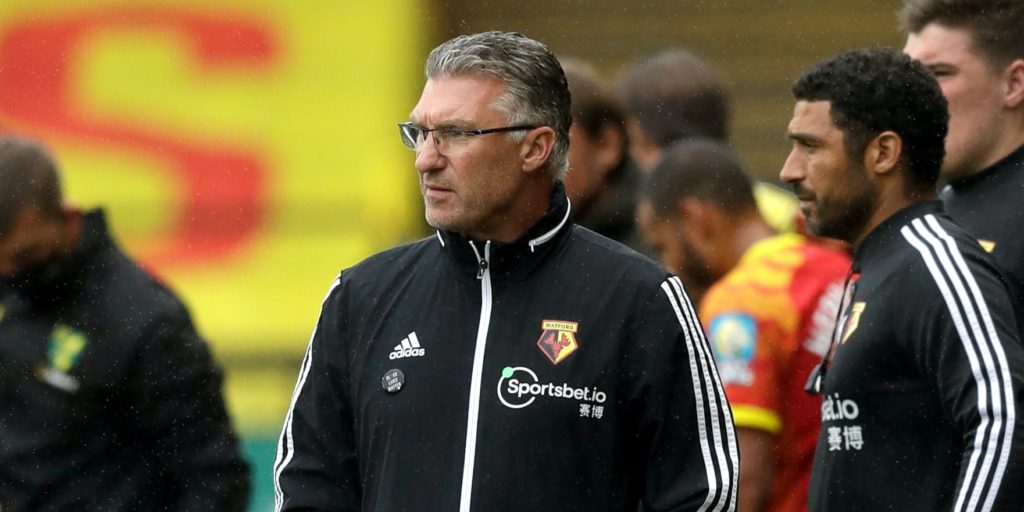 The England forward’s first goal for Watford provide vital in their push for Premier League safety.

Watford manager Nigel Pearson was pleased for Danny Welbeck after his wonder goal boosted his side’s survival chances in a 2-1 win over Norwich.

Welbeck capitalised on a deflected cross to hit an incredible overhead kick as Nigel Pearson’s side came from a goal behind to secure their first win since the Premier League restart.

The Canaries have now lost all six of their matches following the resumption. Emi Buendia scored Norwich’s first goal since February 29 inside the first five minutes, but his goal was quickly cancelled out by Craig Dawson’s header.

Welbeck then put his side ahead with his first Premier League goal for Watford since he signed for the club in the summer.

When asked whether the goal would give the 29-year-old confidence, Pearson said: “(Yes), hopefully for him on a personal level.

“He deserves it. He’s been very patient, he’s worked exceptionally hard to get match fit.

“I’m really pleased for him, he’s a great lad as well.”

The result leaves the Hornets four points clear of the relegation zone with four games left to play to ensure their top-flight safety.

On whether the three points would give Watford breathing space, the manager said: “No, not breathing space. It’s an important win in the context that we’ve been unable to find a win so far.

“It’s not been easy to acclimatise but it’s a very important win for us. But we’ve now got four more games in which we need to pick up points to keep ourselves up.

“We don’t have an opportunity to not stay focused, it’s really important.”

Daniel Farke’s side sit firmly rooted to the bottom of the table, but the manager was pleased with his side’s spirited performance.

When asked if he saw a response from their previous matches, Farke said: “Yes, (but) sadly with the wrong outcome. I really feel for the lads today.

“Our situation before today was already unbelievably difficult and then to deliver such a performance, we knew they would try to bully us and overrun us and I think we delivered a fully-committed performance and the lads left it all out on the pitch.”

The Norwich manager added: “I think we delivered a fully-committed performance, we won each and every statistic, but sadly we lost this game 2-1.

“I think in many of the topics we were the better side and I can’t accuse the lads at all, I think they tried until the end everything.

“In the end we have to accept that the individual quality of all our opponents and also of Watford was better today and that’s the reason why we lost the game.

“I was happy what the performance and happy with the commitment.”