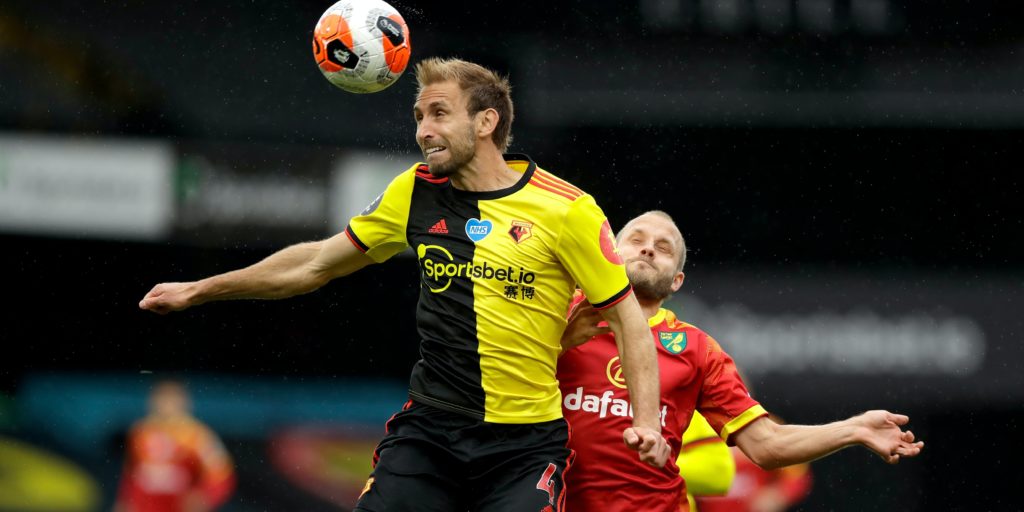 The former Arsenal forward scored his first Watford goal to seal victory over Norwich and ease their relegation worries.

The 29-year-old hit an incredible overhead kick winner as Nigel Pearson’s side came from a goal behind to secure a 2-1 win over Norwich.

The goal was Welbeck’s first Premier League goal for the Hornets in an injury-plagued season that has limited the striker to just 16 appearances.

Dawson also got his name on the scoresheet, for the second time since the restart, his header cancelling out Emiliano Buendia’s opener in the 10th minute.

When asked about Welbeck’s strike, Dawson said: “As soon as he went for it, I just knew it was going in, I had that feeling.

“Great for him as well because he’s worked ever so hard to get fit and to be where he is now so hopefully he can continue his little scoring run.”

The victory lifted Watford four points clear of the relegation zone with four matches left to play in the season but Dawson insisted the club are just focusing on themselves rather than the table.

The defender said: “We’ve got a great squad and we haven’t performed as well as we wanted to this season and we’re working hard.

“Hopefully we can turn things around and keep working hard on the training pitch and get the points on the board.

“We’re just fully focused on ourselves and we know that the games that are coming up are great opportunities for us so it’s all about recovery now and getting ourselves ready for the next game.”

Norwich have now lost all six of their matches following the resumption and sit firmly rooted to the foot of the Premier League table and require victory over West Ham on Saturday to avoid becoming the first team to be relegated this season.

Goalkeeper Tim Krul believes the club have not been good enough after falling to defeat despite taking an early lead at Vicarage Road.

“We just have to take it on the chin,” Krul told the club’s official website.

“We don’t want this season to fizzle out, we need some reaction but it’s really hard. At the end of the day, it’s not good enough when you lose four or five in a row.

“Again, we showed good signs but it’s not good enough for this league. This league is unforgiving and we all know that little details change games.”

Krul added: “We’ve made big mistakes. I think everyone, not just one person, we need to all look in the mirror. That’s the big thing, from top to bottom we’ve all made mistakes.”