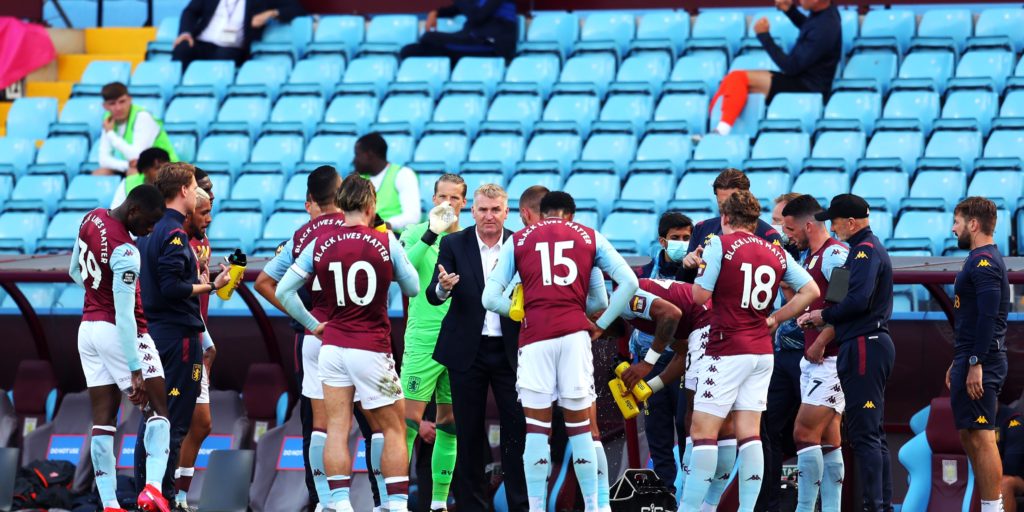 Smith’s side take on in-form Manchester United on Thursday.

Aston Villa head coach Dean Smith has challenged his players to make up for their missed opportunities as they head into the final five matches of the season.

Since the Premier League restarted Villa have taken just two points from five matches to leave them currently four points from safety.

Two of their three defeats have been by the odd goal and on Sunday they had more chances than champions Liverpool in the first 70 minutes at Anfield only to lose 2-0.

Smith knows that trend has to change, although next up are an in-form Manchester United side who have not lost a league match at Villa Park in almost 25 years.

“Our form in terms of performance levels has been much better since the restart,” he said.

“We haven’t got the points tally we feel we deserve and probably lack a bit in the final third.

“There’s certainly points we have left out there and we should be in a much healthier position.

“The only way we can put that right is on the training ground and in the last five games.”

Villa meet United at the worst possible time, with confidence high among Ole Gunnar Solskjaer’s side, who are enjoying a 16-match unbeaten run.

United are closing on on Champions League qualification, which seemed a distant dream when the two teams met at Old Trafford in December, the game ending in a 2-2 draw to leave United in ninth place.

However, Smith believes there are areas to exploit and was encouraged by the display against Liverpool.

“They are a very good team, they have improved. (Bruno) Fernandes is playing very well, they have pace and power up front,” added Smith.

“But they have conceded a couple of goals against Bournemouth. You can see weaknesses in any team.

“We felt there were weaknesses to exploit against Liverpool. So that’s our job as coaches to analyse weaknesses, try and exploit them and stifle their strengths as well.

“We got a point at Old Trafford, took a lead thanks to a great goal from Jack (Grealish) and we more than matched them on the day.

“We have to do that again, they’re in a better run of form now but there is a lot of desire within the team.”

Defender Tyrone Mings and Grealish are fit to play having both struggled with calf issues at Anfield.