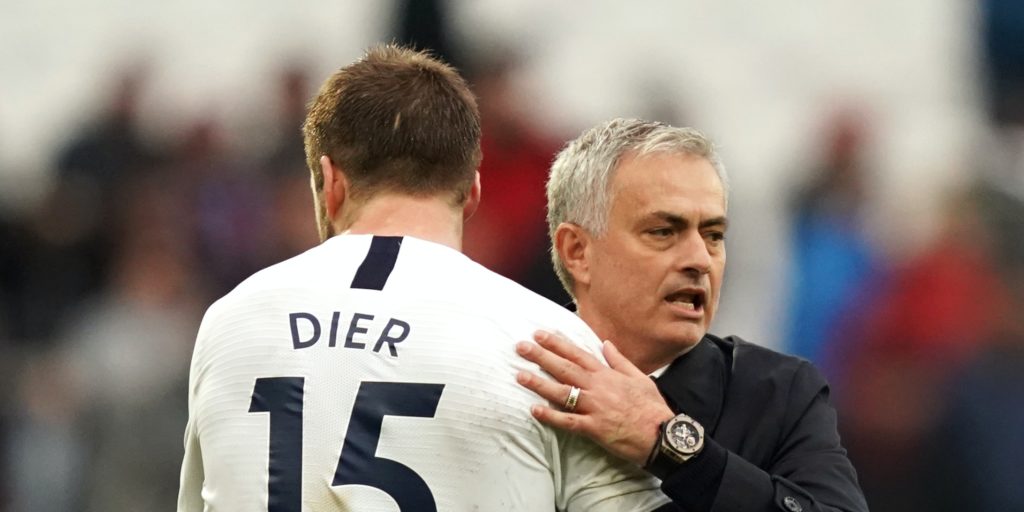 Dier was handed a four-match suspension on Wednesd after he climbed into the stand following Spurs’ FA Cup exit to Norwich in March to confront a fan.

Jose Mourinho chose to keep his counsel on Eric Dier’s four-match ban in fear of receiving a punishment himself but said Tottenham are unlikely to appeal the decision.

Dier has been handed the sanction after he climbed into the stand following Spurs’ FA Cup exit to Norwich in March to confront a fan who was arguing with his brother.

An independent panel ruled it was not his sole intention to protect his brother when he entered the stands that his behaviour was “objectively threatening”.

Mourinho has previously said he did not expect Dier to receive any punishment and was clearly nonplussed about the decision, opting to keep quiet.

He said: “No reaction. I prefer no reaction. I am not going to answer, if I answer I am going to be in trouble and I don’t want to be. So no comment on that.”

On a possible appeal he added: “I don’t think so, if you appeal you have other risks. At least let’s start next season without a suspension. We all know how it works at these FA decisions.

The 26-year-old accepted the misconduct charge, but denied his behaviour was threatening and argued his intention was only to protect his brother Patrick.

The spectator involved told police in a statement that he was acting like “an idiot” and did not feel threatened.

However, the panel chose not to believe the statement, which was not released by police and had to be communicated to the process via Dier’s solicitor, instead deciding the fan was scared based on video footage.

The fan was shown racing towards an exit as Dier climbed the stands, while another piece of footage, which appears pivotal in the case, captured Dier going towards the fan rather than his brother.

The written reasons from the panel in the case read: “We are quite satisfied on the balance of probabilities, that Eric Diers’s conduct in (1) chasing the spectator through the well populated stand; (2) passing through supporters; (3) causing some to move out of his way; (4) over the distance; (5) for the time; and (6) in the manner he did, was objectively threatening.

“We appreciate some filmed the incident and others simply watched. But, that of itself does not prevent it being, when viewed objectively, threatening.

“His conduct caused or contributed to the spectator fleeing. It is also no doubt why a number of people held him back from exit 103 and stopped him from pursuing the fleeing spectator.

“Eric Dier’s conduct may not have been threatening to those holding him back, but we are satisfied it was threatening towards the spectator, and also when viewed objectively.”

The panel ruled that the aggravating factors included the distance Dier travelled through a stand heavily populated by spectators, pursuing the spectator after he had moved away and posed no threat to Dier’s brother and that he is a high-profile footballer.

Dier’s ban starts immediately, meaning he will miss Thursday’s trip to Bournemouth as well as games against Arsenal, Newcastle and Leicester.

Dele Alli will also be missing at the Vitality Stadium as he battles a hamstring injury.

Mourinho added of the problem: “Small, but not ready for tomorrow.

“We know that he had a little sad history about hamstrings last season I think, so it’s to be careful and not risk when you know that he has a little problem there. So tomorrow out.”