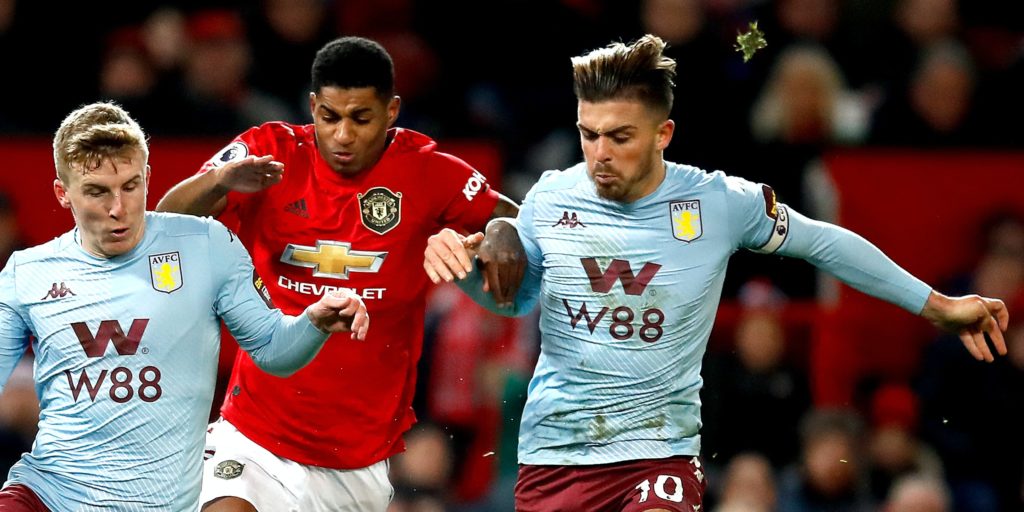 The 24-year-old scored the opener when the two teams played out a 2-2 draw at Old Trafford in December.

The 24-year-old has impressed during a challenging season for Dean Smith’s promoted side and stole show when the sides drew 2-2 at Old Trafford in December.

Grealish scored the opener and presented all manner of problems for United, with Villa praying their captain can produce a similar standout display to kickstart their survival hopes in Thursday’s reverse fixture.

The match also offers the chance to impress Solskjaer as talk continues to rumble on over a possible summer move to the Old Trafford giants.

“I think the last game obviously they caused us some problems, both Grealish off left and (Anwar) El Ghazi off the right,” the United boss said.

“He scored a fantastic goal. There’s been lots said and talked about him and we need to be aware of him.

“Whoever is close to him, if he’s off the left, in the middle, on the right.

“What he does is attract players to him and create space for others, so there’s not just one player in that Villa team. There’s many of them.”

The PA news agency understands United have looked at the impressive attacking midfielder as a potential signing but their priorities may well lie elsewhere given the way their attacking unit has flourished.

Last weekend’s thrilling 5-2 win against Bournemouth extended their unbeaten run to 16 matches in all competitions and Solskjaer knows they must keep their pedal to the metal.

While their current fifth-placed position would be enough for Champions League qualification should Manchester City fail to overturn their European ban, United will secure a top-four finish if they win their remaining games.

Asked if he anticipated needing to win their final five Premier League matches to seal a return to European football’s top table, Solskjaer said: “I think so, yeah.

“Of course, you never know what’s going to happen but it looks like obviously the teams around are playing well.

“But there’s so many games, so we’ve just focused on this one, the next one and that one. If you win every single one of them, we’re in the top four. We cannot rely on help from anyone else.

“We just have to do it ourselves and that is to grow as a team and know that going into next season we can put in a different challenge to other teams as well in front of us.”

United may have to do without Victor Lindelof at Villa Park after the Sweden international was forced off with a back complaint against Bournemouth.

Eric Bailly had a few hairy moments having replaced the centre-back at half-time last weekend – a match from which footage emerged that fuelled talk that United are hoping to bolster their defence this summer.

Solskjaer appeared to tell Holland international Nathan Ake of his interest in him as the Bournemouth defender walked off the field, with the Red Devils boss also suggesting he wants to sign a left-footed centre-back.

When that was put to the Norwegian on Wednesday morning, he said: “I’ve got seven centre-backs, so I don’t know where that’s come from. We’re fine.”