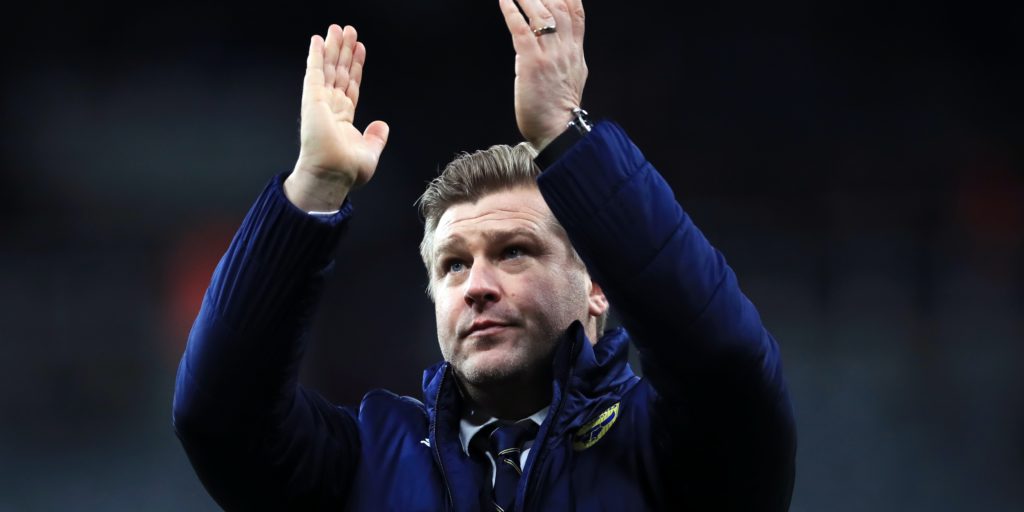 Oxford edged out Portsmouth on penalties to reach the third-tier play-off decider.

Karl Robinson has rejected opposite number Gareth Ainsworth’s derby rhetoric ahead of Oxford’s meeting with Wycombe in Monday’s League One play-off final.

Oxford edged out Portsmouth on penalties to reach the third-tier play-off decider, and Robinson is confident his players will keep their heads on Monday.

Asked for his response to Ainsworth’s prediction, Robinson said: “No comment, if that’s what they want to turn it into.

“But it’s a football game, with rules, and referees. And it can’t be tasty, because there’s limits in the way you can do things.

“If you look at my comments, I think we’ve been utterly respectful to everybody we’ve played against this season.

“If it’s tasty, then the referee’s there to control it.

“I’m not going to get drawn into that, I’m more worried about the quality of Wycombe and the quality things they bring to a game of football.”

Robinson explained his desire to prioritise respect was based in the harsh realities that defeats can leave jobs on the line.

The 39-year-old even admitted to weighing up the impact of karma, when charting how he dampened down celebrations in a last-gasp victory over Wycombe last term.

A late 2-1 win over Ainsworth’s men helped Oxford gain a survival fight edge over their local rivals, but also offered Robinson and his squad a chance to avoid any gloating.

“We played Wycombe here a season ago when we were both in difficult situations,” said Robinson.

“The respect I have for Wycombe I think a lot of people know.

“And after we had won, I made my players turn the music off in the dressing room.

“We were both in the relegation zone, both fighting for our lives, we had two teams that are really honest in what they do.

“And we didn’t feel it was right to have music on in the dressing room after the game, knowing how low they could have been.

“We felt the respect we had for the opposition was to not celebrate that, because we felt it might come back to bite you on the bum in some ways.

“Let’s not get this wrong, I’ve done things and there’s things I’ll look back on with great regret, but you do hopefully learn along the way.

“The reason I turned the music off was a team had come to us earlier in the season, I don’t remember who it was, but we were rock bottom and I was probably getting the sack that night.

“And they blasted their music out the door and into the tunnel. And you think to yourself ‘come on this is about people’s livelihoods here’.

“I know Gareth wouldn’t want any harm to come to me, yet he’d want me beaten every time as a manager.

“If you have total respect for the opposition, it allows you to be ultra-competitive once the whistle goes.”