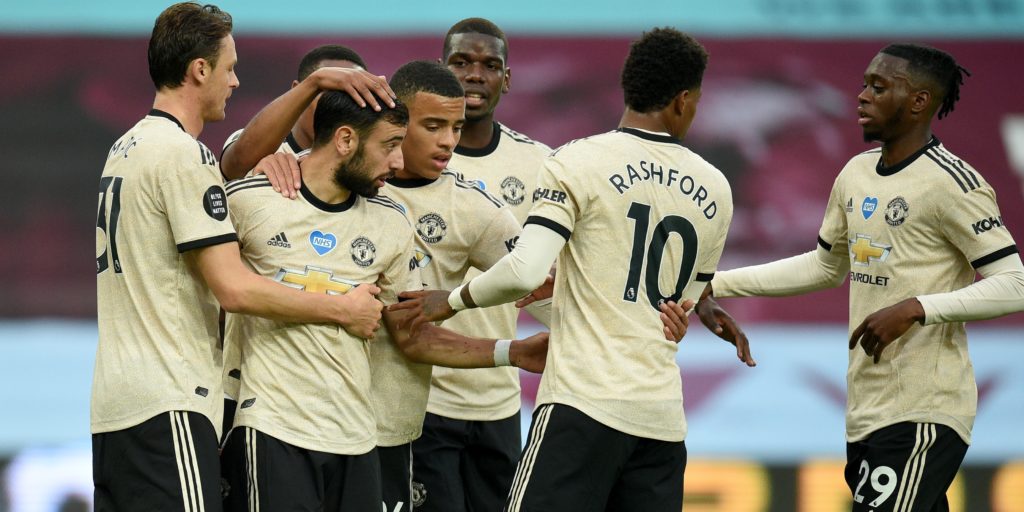 United are a point adrift of the top four after victory at Villa Park.

Bruno Fernandes’ contentious penalty – after he appeared to tread on Ezri Konsa – gave the visitors the platform for victory at Villa Park.

Referee Jon Moss gave the spot-kick and his decision was backed up by VAR official Graham Scott, much to Villa’s disbelief and fury.

Mason Greenwood’s missile and Paul Pogba’s first goal for 453 days then saw United extend their unbeaten run to 17 games in all competitions in another statement of intent.

Ole Gunnar Solskjaer’s men closed the gap on fourth-placed Leicester to a point. Fifth-placed United go to the King Power Stadium on the final day of the season.

Villa raged about the penalty but defeat was another hammer blow to their dwindling hopes of avoiding the drop.

Trezeguet hit the post just before Fernandes’ opener, but Dean Smith’s side remain four points from safety with just four games left – starting at home to Crystal Palace on Sunday.

United marched on to keep the pressure on the top four in what looks set to be an increasingly frantic race for Europe.

Yet the visitors – unchanged for a fourth straight Premier League game for the first time since 2006 – were initially disjointed.

The hosts had joy out wide and Konsa’s cross evaded the United backline to reach Jack Grealish, only for the Old Trafford target to fire wide at the far post.

With time running out to save themselves Villa needed something special and they almost caught United cold after 25 minutes.

Trezeguet strode forward unchallenged after Pepe Reina’s clearance, but his low strike hit the outside of the post, a miss which would prove costly two minutes later.

United had been leggy but took their golden chance to open the scoring when Fernandes went down under Konsa’s challenge.

Villa were furious, with the midfielder appearing to tread on Konsa – indeed it was more of a foul on the Villa man. But the decision stood after a VAR review.

It allowed Fernandes to roll in his seventh goal in just 10 Premier League appearances.

It was the turning point and Fernandes should have bagged a second just before the break but could only head Luke Shaw’s cross over from six yards.

Villa would have felt hard done by going into half-time a goal behind, yet Greenwood delivered a killer blow in stoppage time.

Anthony Martial pressured Tyrone Mings into conceding possession midway in United’s half for Fernandes and Greenwood to break.

Martial eventually returned the ball to Greenwood and, with Douglas Luiz standing off, the teenager’s rocket flew into the bottom corner from the edge of the box.

Rashford had a goal ruled out with Pogba offside, but United did not have to wait long for their third which arrived after 58 minutes.

With Villa’s confidence shot, they left Pogba free 18 yards out and he had time to sweep a fine finish low past Reina – his first United goal since April 2019.

Martial smacked the bar as United threatened to run riot, but they were forced to settle for what they had after Rashford was denied by Reina late on.