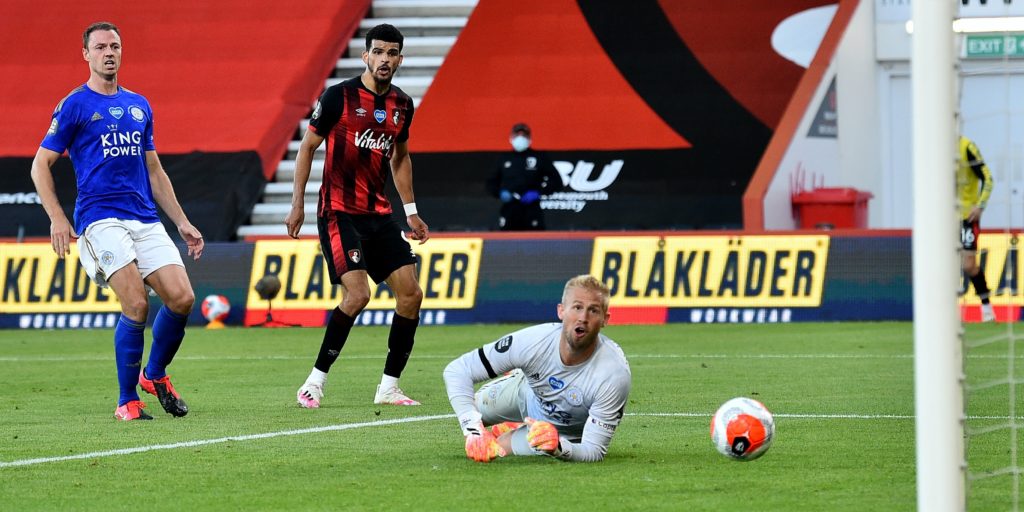 The Cherries trailed 1-0 until Junior Stanislas levelled from the spot in the 66th minute.

Dominic Solanke ended his Premier League goal drought with a timely brace as Bournemouth boosted their slim survival hopes by fighting back in astonishing fashion to shock Champions League-chasing Leicester.

Solanke, without a goal in 38 previous top-flight appearances since a GBP 19million move from Liverpool in January 2019, slotted home twice in the second half as the Cherries romped to a precious 4-1 win.

A remarkable south-coast contest flipped on his head during a crazy two-minute spell in which the Cherries scored twice to go ahead and Leicester defender Caglar Soyuncu was sent off.

The overdue victory for Eddie Howe’s hosts leaves them just three points adrift of safety, while giving their goal difference a significant boost as they chase down West Ham and Watford.

Meanwhile, the Foxes’ European fate is now out of their hands after their amazing capitulation.

They stay fourth following a seventh away trip without success, leaving Manchester United with an opportunity to leapfrog them when they host Southampton on Monday.

Leicester had the better of a fairly forgettable opening quarter in which their flow was disrupted by Marc Albrighton being forced off by injury.

They edged ahead in the 24th minute as Bournemouth contributed to their own downfall.

Kelechi Iheanacho made the most of some slack defending to break clear and, after Lloyd Kelly was unable to fully clear his initial effort, Premier League leading scorer Vardy slid in to scramble home his 23rd goal of the season.

Bournemouth appeared devoid of confidence and would have gone in two goals down at the break had Nathan Ake not recovered to deny Vardy’s goal-bound effort following a sloppy pass from Arnaut Danjuma.

The incident still proved extremely costly as Holland international Ake, the Cherries’ standout defender, was injured making the block and limped off.

Leicester were dominating proceedings but Cherries winger David Brooks threatened to level against the run of play in first-half stoppage time with a long-range effort which Kasper Schmeichel was forced to tip behind.

Bournemouth came out with renewed vigour and had penalty shouts waved away be referee Stuart Attwell following Soyuncu’s nudge on Callum Wilson.

The game then turned on its head during a sensational two-minute spell sparked by a dreadful goal-kick from Schmeichel.

Denmark keeper Schmeichel hammered the ball straight at team-mate Wilfred Ndidi, who in his haste to rush back hauled down Wilson, allowing substitute Stanislas to stroke down the middle from the spot.

Solanke, playing in place of the injured Joshua King, then broke clear to roll the ball underneath Schmeichel, with Soyuncu shown a straight red card in the aftermath for kicking out as Wilson attempted to retrieve the ball.

With Leicester still reeling, Bournemouth put the result beyond doubt in the final 10 minutes to halt a nine-match winless streak.

Foxes defender Evans deflected a low Stanisals effort into his own net with seven minutes remaining, before Solanke paid back some of his hefty transfer fee with another composed finish three minutes from time.

Cherries academy graduate Sam Surridge wasted a late chance to add further gloss to the scoreline, but Howe’s men will be more than content with a resounding win which drags them back from the brink.