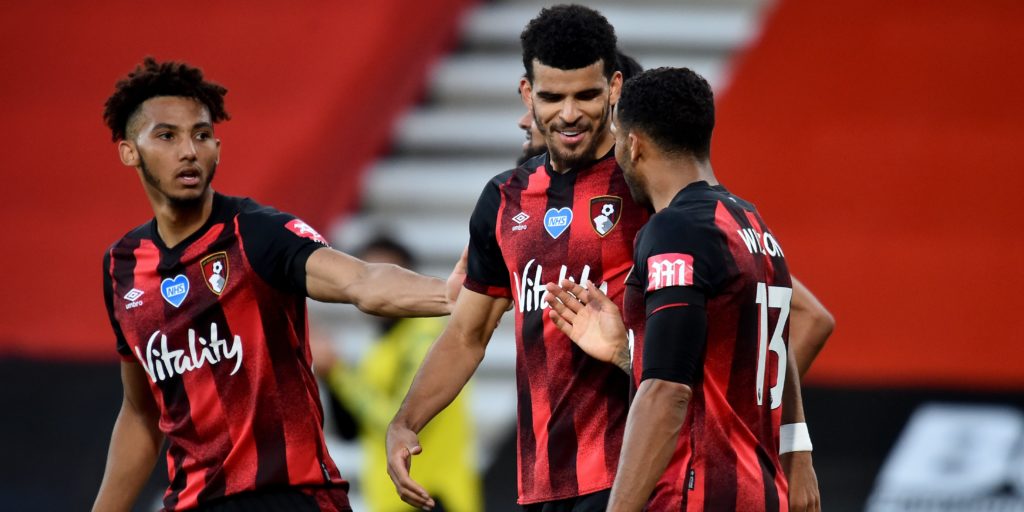 The once-capped England striker had gone 38 top-flight appearances without finding the net.

Eddie Howe insists he has never doubted the ability of Dominic Solanke after the striker answered his critics with a crucial double in Bournemouth’s stunning 4-1 win over Leicester.

Solanke’s timely brace helped drag the struggling Cherries back from the brink of Premier League League relegation during a sensational second-half fightback.

The once-capped England striker had gone 38 top-flight appearances without finding the net since moving to the south coast from Liverpool for a reported GBP 19million in January 2019.

“He was huge. I’ve always felt that the goals have been there for Dom, they’ve been coming,” said Howe, whose team sit three points from safety with three games to go.

“I thought he took his two goals very well, especially the second one because that was a really difficult ball to receive and his quick feet and his technical abilities presented him with the chance and he’s taken it really well, so very positive signs for him. I thought he was outstanding.

“Dominic is someone who has always kept his head down, he’s worked hard, he’s never let any outside noise affect him, he’s been very consistent with his attitude and his work.

“He’s a great lad, he’s got an incredible ability. And he’s had to deal with a lot the other way (criticism).

“Sometimes you’ve got to realise that very young players make big moves and moving area and all the things that come with a transfer, sometimes it takes players longer to settle at a new club than others.

“But he’s an outstanding player, I have said that from day one, and he’ll only continue to get better.”

High-flying Leicester were cruising towards a precious three points which would have taken them above Chelsea and into third place following Jamie Vardy’s 23rd Premier League goal of the season.

But the Foxes capitulated in the second period and, following second-placed Manchester City’s successful appeal against a two-year European ban, face an uphill battle to qualify for the Champions League.

A costly error from goalkeeper Kasper Schmeichel led to Cherries substitute Junior Stanislas equalising from the penalty spot, while Caglar Soyuncu was sent off for inexplicably kicking out at Callum Wilson in the aftermath of Solanke’s first.

A late Jonny Evans own goal followed by Solanke’s second capped a miserable trip to Dorset which prompted manager Brendan Rodgers to apologise to fans and brand the second-half display “unacceptable”.

Rodgers, whose side face Sheffield United, Tottenham and Manchester United in their final three fixtures, says his team must toughen up mentally and start performing for the full 90 minutes.

“I think we’ve shown too much of late that we’re a 45-minute team, that we’ve played for 45 and then not been so good in the second half, or vice versa,” said the Foxes boss.

“We have to have a greater mentality and personality to play for longer periods and that’s something we have to go in and analyse and look at.

“We can’t dwell on it. Now it’s about finding the way to get over the line and ensure that we achieve our goals, which was to have European football. We missed a huge opportunity to jump into third.

“But we’ll go away, pick our spirits up again.”