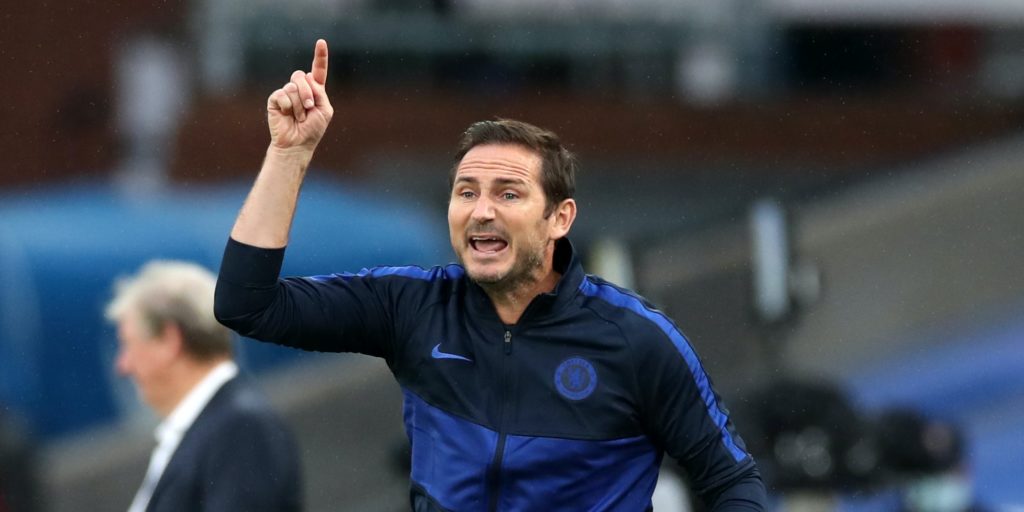 The Blues have already brought Hakim Ziyech and Timo Werner in for next season.

Frank Lampard has told his Chelsea players they are not fighting for their Stamford Bridge futures as they bid to secure Champions League football.

The Blues boss admitted after Saturday’s comprehensive 3-0 loss at Sheffield United that he had “learned a lot” about his team.

Chelsea are overhauling their squad this summer, with Ajax’s Hakim Ziyech and RB Leipzig’s Timo Werner already on board for next term in west London.

The Blues are expected to keep pushing for more recruits and a clutch of players should also leave the club – but Lampard has insisted he will not use anyone’s long-term futures as motivation ahead of Tuesday’s crucial Premier League clash with already-relegated Norwich.

“In terms of fighting for their careers, no, I want the players just to fight to be a Chelsea player and win the game that’s in hand,” said Lampard.

“Tomorrow that’s Norwich, and it will be Manchester United at the weekend.

“So we don’t jump ahead, and nobody should. The next game ahead is the only one that matters at the minute.

“We’re at a critical stage of the season; Norwich tomorrow then in terms of the league Liverpool and Wolves.

“We know what’s in front of us, we know we have the capabilities in the squad and the team because we’ve shown this season at lots of different points, that’s what’s got us into third position and now we need to finish the job.”

Chelsea’s fight for a top-four finish continues to remain in their own hands then, with Liverpool and Wolves still to play after Norwich visit Stamford Bridge on Tuesday.

The overturning of Manchester City’s European ban by the Court of Arbitration for Sport (CAS) means only the league’s top-four finishers will qualify for the Champions League.

But while fifth place will no longer be sufficient for a seat at Europe’s top table next term, Lampard insisted Chelsea simply have to sharpen up after Saturday’s loss.

Asked if the removal of City’s ban adds extra pressure, Lampard said: “I don’t know, we’re sitting third; as I said before it’s in our hands.

“I wouldn’t like the players to have been thinking ‘oh there’s an extra place does that mean we can relax a bit more’, it can’t be the way.

“So I think the pressure’s there to get into the Champions League. It’s just clear now, after what happened this morning, of what the positions are. And we have to fight for it.

“I genuinely don’t see beyond the games in hand. We’ve got a few games now we know that. We want to win them and then see if it gets us European Champions League football for next season.

“I was never pinning my hopes on it being an extra team getting in or not, we worry about ourselves.

“If we win enough games now we can get into the Champions League qualification.”

N’Golo Kante will miss Tuesday’s Norwich clash as he continues to battle hamstring trouble, but the France midfielder could yet be fit for Sunday’s FA Cup semi-final against Manchester United.

Andreas Christensen came off at half-time at Sheffield United with a knock, but will be fit to face the Canaries.

Asked if qualifying for the Champions League will impact Chelsea’s bargaining power in the transfer market, Lampard said: “That’s not really a question just for me and it is a hypothetical one before the event.

“We have brought a couple of players into the club already which shows positivity about where we want to go.

“I know where I want to go with the squad, but that has to be a fluid conversation with the club. Of course, economics will come into it, so we will cross that bridge when it comes.”