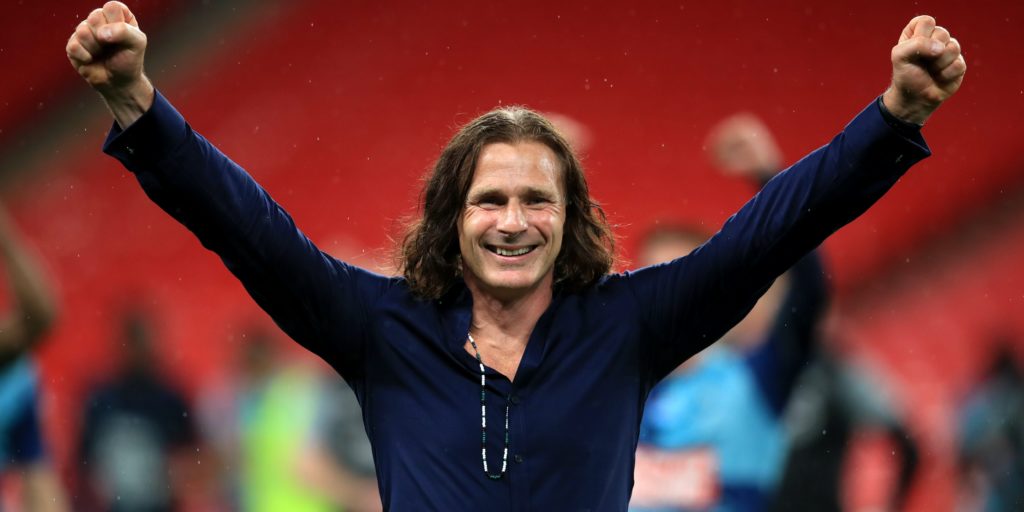 Wanderers beat Oxford 2-1 in the League One play-off final.

Wycombe manager Gareth Ainsworth hailed his side’s promotion to the Championship as the club’s “greatest hits”.

Wanderers beat Oxford 2-1 at an empty Wembley Stadium to secure promotion to English football’s second tier for the first time in their 133-year history.

Having been a non-league side until 1993, Wycombe have come a long way in recent years and suffered their own play-off final heartbreak under Ainsworth in 2015 in a bid to gain promotion to League One.

Joe Jacobson’s 79th-minute penalty secured Wycombe’s victory after a deflected Anthony Stewart header was cancelled out by Mark Sykes’ looping cross-shot, and Ainsworth paid tribute to the journey taken by the club.

After the match, the Wanderers boss and part-time rock band frontman said: “This is Wycombe Wanderers’ greatest hits by a million miles. It’s rock’n’roll time.

“I’ve had some great texts off people. Martin O’Neill who’s been fantastic, the absolute legend who brought this football club into the Football League, got a great text off him yesterday and it just calmed my nerves. It just settled me down that knowing somebody like him knows what a great achievement even getting to this play-off final was, never mind winning it.

“Little moments like that make all the difference, they enable me to be me and give the messages that I wanted to give to the boys.”

Wycombe started the season in disarray with just nine players on the books and many tipped them for relegation, but Ainsworth’s side pulled through with a core of players who had risen through the ranks with the manager.

“Darius (Charles), Jacobson, (Adebayo) Akinfenwa, (Matt) Bloomfield, four names there that have more than done their shift in the bottom two divisions and finally they’ve become Championship players today and I couldn’t be happier for them,” he said.

“It’s an amazing place to be, one of the biggest leagues in the world, and Wycombe Wanderers are going to be playing in it next year.”

Oxford boss Karl Robinson insisted his players never let him down although he expressed concerns that a number could leave over the summer transfer period.

Speaking after the match, the Us boss said: “We’ve got a very very young team full of talented individuals and for me to start next season without some of these is going to be another kick.

“We’ve lost so many players this year and we’ve almost hung on and achieved something that a few didn’t think was possible.

“So I’ll come in on Wednesday and I’m sure agents will be on the phone. I’m sure there’s been a few football clubs here today watching our talented players and the beauty about that is my players never let me down.

“Today I think some of those players have shown the talent they possess.”