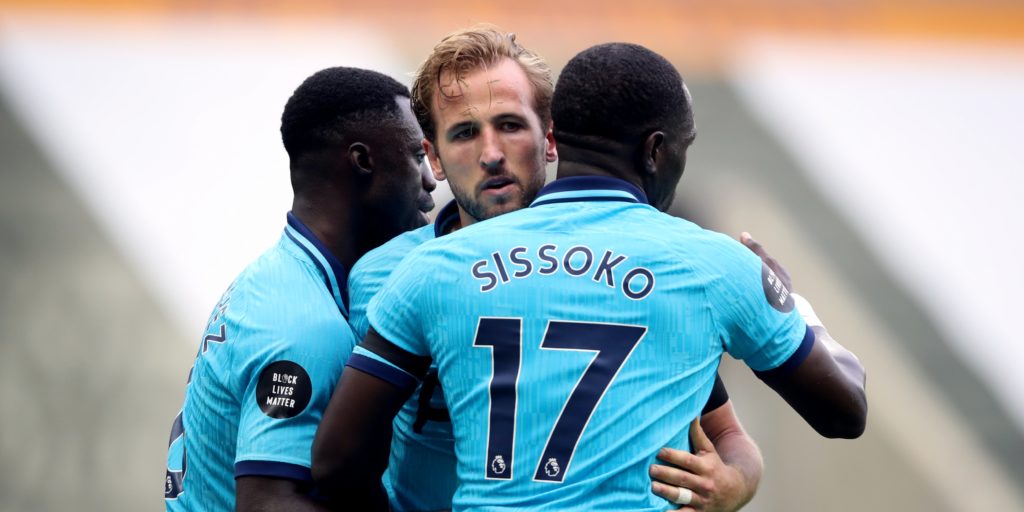 The striker scored twice against Newcastle.

The England captain brought up the milestone before his 15th league goal of the season took him past 20 in all competitions for the sixth successive campaign and clinched the points after Matt Ritchie’s piledriver had cancelled out Son Heung-min’s opener.

In the process, he ended former Chelsea and Manchester United manager Mourinho’s barren run on Tyneside.

Victory kept Spurs in the hunt for European qualification, while a third successive defeat for Steve Bruce’s men dented his hopes of beating the 45 points the Magpies managed last season under predecessor Rafael Benitez.

Newcastle started in determined mood with Miguel Almiron seeing a sixth-minute shot deflected wide after Allan Saint-Maximin, DeAndre Yedlin and Jonjo Shelvey had combined to allow Emil Krafth to cross from the right.

Almiron skied his attempt from the resulting corner and Shelvey warmed keeper Hugo Lloris’ hands with an eighth-minute free-kick before heading wastefully over from Ritchie’s inviting cross nine minutes later.

The visitors started to work their way into the game without troubling keeper Martin Dubravka, but with Shelvey’s range of passing and Saint-Maximin’s trickery repeatedly stretching their defence, they continued to look vulnerable at the back.

But it was Newcastle who cracked first when, with 27 minutes gone, Fabian Schar over-ran the ball as he tried to play out from the back, inviting Lucas Moura to intercept, and he, Kane and Giovani Lo Celso shifted it on to Son, who cut inside before firing into the bottom corner through Yedlin’s legs.

It would have been 2-0 on the half-hour had Dubravka not thrown himself to his left to turn away Son’s deflected effort from distance, but Lloris had to get down at his near-post to turn away Saint-Maximin’s shot after opting to punch a high ball which Ben Davies sliced back into the danger area.

Dwight Gayle saw a glancing header from Shelvey’s cross come back off the post with Lloris beaten two minutes later.

But his side was level within 11 minutes of the restart when Serge Aurier, playing just two days after the death of his brother Christopher, could only help the ball into Ritchie’s path after substitute Valentino Lazaro had surged into the box, and he lashed an unstoppable shot across Lloris and inside the far post.

Newcastle, however, had been level for just four minutes when Steven Bergwijn announced his arrival from the bench with a pinpoint cross for Kane to out-jump Krafth and head past Dubravka, reaching his landmark.

Lazaro blasted into the side-netting with 18 minutes remaining, but Kane wrapped up the win at the death when, after Dubravka had parried substitute Erik Lamela’s shot, he stooped to head home the rebound.