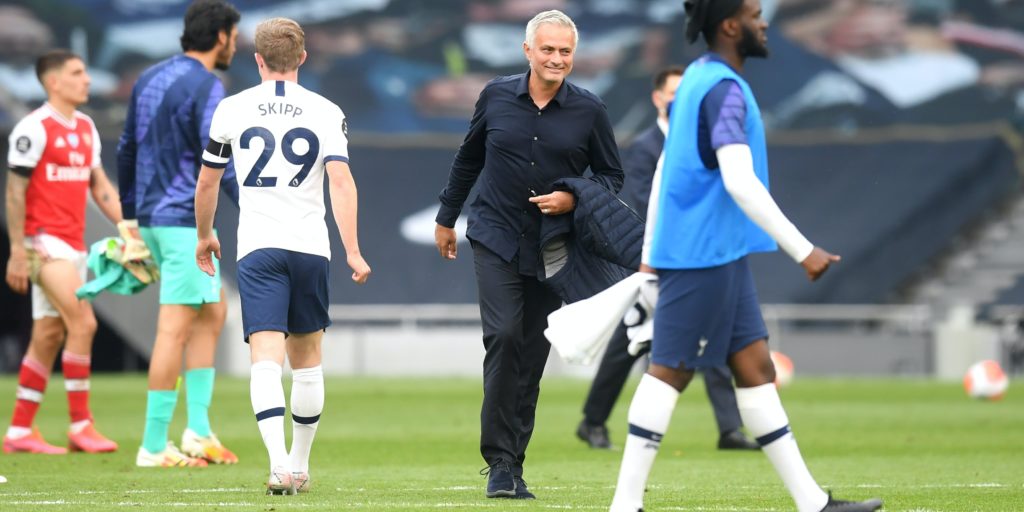 Mourinho saw his side come from behind to claim the three points which saw them leapfrog the Gunners in the Premier League table and into eighth.

Jose Mourinho hailed Tottenham for successfully adapting to their tactical switch as they edged to a hard-fought 2-1 victory against arch rivals Arsenal.

In his first north London derby since arriving at the club last November, the Portuguese manager saw his side come from behind to claim the three points which saw them leapfrog the Gunners in the Premier League table and into eighth.

Alexandre Lacazette fired Arsenal into a 16th-minute lead but their advantage lasted less than three minutes as Son Heung-min capitalised on a slack Sead Kolasinac pass to equalise.

The visitors dictated possession in the second half, with Pierre-Emerick Aubameyang rattling the crossbar, before Toby Alderweireld won it for Spurs when he headed home Son’s inviting corner with nine minutes remaining.

Mourinho, who adopted a 4-4-2 formation, hailed how his side “controlled” Arsenal and also believes Tottenham can qualify for next season’s Europa League.

The Tottenham manager told Sky Sports: “I think the game was more tactical than anything.

“To be honest I think Mikel (Arteta) found a way for them to play, to be stable and to improve – they are improving and we felt that we should adapt slightly to them and I think we did it very well.

“Because how many times (Arsenal full-backs Kieran) Tierney and (Hector) Bellerin normally reach the last third and how well they were controlled today. I think they were very controlled at that level.”

Mourinho added: “Even in the first period of the second half when they had more of the ball and they were more in our half, we were quite comfortable in that situation.

“I think also the two midfielders, they did a great job and then we found our chances and great spirit, (that) really helped.

“I think during the game nobody thought about it, even myself I didn’t, but Arsenal had 48 hours more than us to rest, so it was hard but come from their hearts this effort, this battle.

“Even in the last minutes of the game after 2-1, zero problems, everything under control so we are happy.

Match-winner Alderweireld believes Spurs had a little bit of luck to secure victory in a very different maiden north London derby at the Tottenham Hotspur Stadium.

The defender spoke about the importance of the three points, telling Sky Sports: “I think it’s massive for us. I think we really wanted to win this game. You know it’s difficult without the fans – a totally different atmosphere – but I think we did everything that we could. We fought.

“I think we did have a little bit of luck to get three points.”

Arsenal boss Mikel Arteta was proud of his players despite the defeat.

The Gunners boss told Sky Sports: “We are really, really sad. We wanted to do it for our fans, for glory and happiness. We tried our best.

“I am really proud of our players, to play the way we played. I have never seen them before dominating the opponent and nullify them as much as I’ve seen today.

“But we gave them a goal again and we conceded a set-piece and, at this level, you cannot do it.”