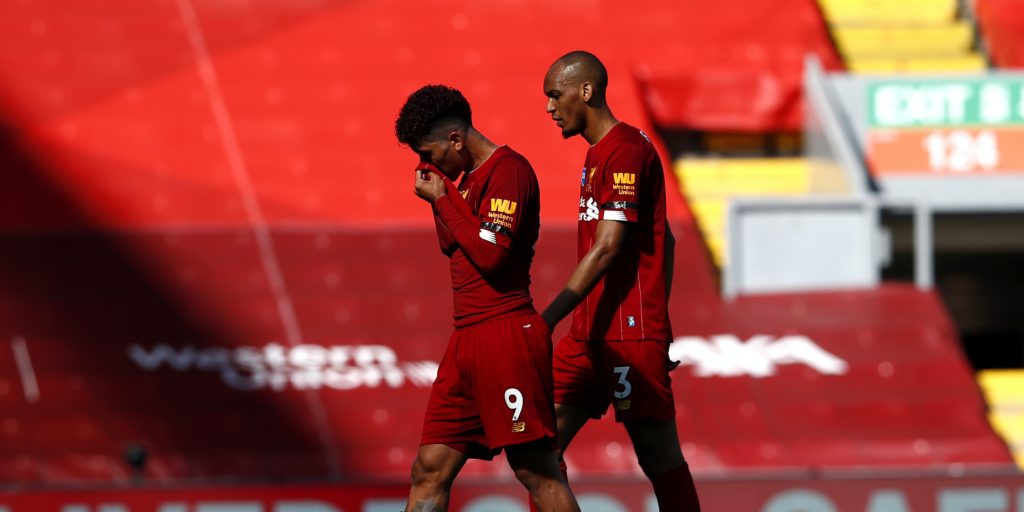 The Brazil international has not scored a Premier League goal at home since March last year.

Liverpool manager Jurgen Klopp has given his backing to forward Roberto Firmino after his Anfield goal drought continued.

The Brazil international has not scored in the Premier League at home since March last year and his strike against Atletico Madrid in the Champions League four months ago is his only goal in front of the Kop since then.

He came closest to ending that run when he beat goalkeeper Nick Pope – not an easy task considering the Burnley goalkeeper’s form in the 1-1 draw which ended Liverpool’s 100 per cent home record – but hit the post to be denied the opportunity to double the Reds’ lead.

The 28-year-old has just 11 goals this season, compared to fellow forwards Mohamed Salah (23) and Sadio Mane (20), and has not scored in the league since January.

“It cannot become a psychological problem because Bobby played an outstanding game and we don’t judge him,” said Klopp after the champions dropped their first points at Anfield since January 2019.

“We only have chances in other positions because Bobby plays the way he plays. And he will score, there is absolutely no doubt about it.

“We are not worried at all about that because he played an outstanding game and was involved in so many decisive situations.”

He handed academy graduate and local-born Curtis Jones his full Premier League debut, in addition to giving fellow 19-year-old Neco Williams his first league start at Anfield in order to rest Trent Alexander-Arnold, and the pair responded with good performances.

Jones, in particular, grew in confidence during his 69-minute spell and probably should have scored at the Kop end for the second match in a row.

But like the more experienced Firmino, Klopp is putting no pressure on the youngsters.

“At the moment if they make a mistake then they are still young and they are human beings, which makes it even more tricky,” he said.

“It is not that they have to make incredible big steps. I am not sure how high the stakes are.

“Young players have so much time on their hands that they really can improve and don’t have the pressure, especially not from us, so if they use the time the future is beautiful for them.”

Expectations of completing another home victory were high when Andy Robertson directed in a curving header from Fabinho’s lofted pass in the first half.

However, Pope was in superb form and they could not beat him again, allowing Jay Rodriguez to equalise in the 69th minute with Johann Gudmundsson almost pulling off an historic victory but crashing his shot against the crossbar.

Burnley boss Sean Dyche, who has had to deal with speculation about his own future and a depleted squad after out-of-contract players failed to sign extensions, praised his team.

“Super proud of the players. Win or lose they always give us everything,” he said.

“There is a lot of noise around us, questions and injuries, but the focus has been clear from myself and the players.

“Obviously the detail in football has been enhanced but you still need a heartbeat, a group of people who care and need to care dearly and I have got that here.

“That is a really valuable thing in team sport and we have it in abundance.”