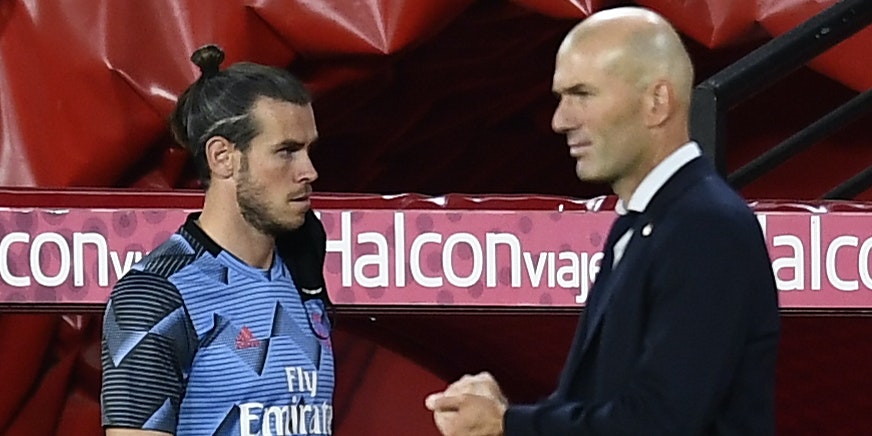 Real Madrid are on the cusp of winning LaLiga but Gareth Bale is dominating the headlines, having been sidelined by Zinedine Zidane in what Spanish football expert Terry Gibson has called a “bizarre” episode.

Los Blancos look home and hosed ahead of Thursday’s clash with Villarreal, when victory will seal a first league championship since 2017 with a match to spare.

Real have been relentless since the restart, winning all nine of their LaLiga matches, but Bale has been conspicuous by his absence from the action.

The Wales forward has played a key role in so many of the Bernabeu giants’ successes since joining from Tottenham in 2013, yet has managed just 100 minutes of football since played resumed.

Bale has been an unused substitute in the past five games and has raised eyebrows with his recent behaviour in the stands, having been pictured pretending to be asleep in one match and looking through imaginary binoculars at another.

Put to Spanish football expert Gibson that Bale appears to be stagnating at the Bernabeu, he told the PA news agency: “That’s an understatement.

“He’s started one of the games since the return to play and he doesn’t even warm-up on the touchline now. He just sits there.

“He had the facemask pulled over his eyes and pretended he was asleep and the other night there’s a new picture where he’s got something rolled up and it looks like he’s looking for a telescope at the game. It’s bizarre.

“But I think it’s a real shame. I think it’s a lesson for big clubs that when they buy these big players they have to have a use for them because not many others can afford to take them off your hands.

“But in saying that, Gareth Bale has been a success at Real Madrid. You can’t say he’s been a waste of the money. He’s not alone. James Rodriguez doesn’t even make the bench now with 10 subs at Real Madrid.

“So, Gareth Bale is in the squad but doesn’t warm-up, isn’t going to come on and it’s just bizarre.”

Gibson left a giant club in search of first-team football during his playing days, having swapped Manchester United for a Wimbledon side he would help win the FA Cup in 1988.

Bale had looked close to a move to China last year and the Covid-19 situation has surely reduced the pool of potential destinations this summer.

The 30-year-old has two years remaining on his big-money deal at the Bernabeu and LaLigaTV pundit Gibson believes Zidane should focus on getting the best out of him.

“He should be playing every week for Real Madrid,” Gibson said. “He should be an important player still. But he clearly isn’t.

“I don’t know how it’s going to end up. I can imagine him staying there another year now and doing the same again.

“I left clubs because you weren’t playing. I had to take a drop in wages when I left Manchester United to go to Wimbledon – not to the extent Gareth Bale is going to do – but a few hundred quid to play first-team football meant a lot to me.

“For Gareth Bale, it’s just a weird one. The ambition has to still be there and I’m sure it is and he’s content with what he’s done in his career.”

Zidane was asked about the Bale situation in his press conference previewing Real’s clash with Villarreal on Thursday, when nearest rivals Barcelona, four points worse off, host Osasuna.

“Second is nowhere for Barcelona and Real Madrid,” Gibson added. “It has to be top.

“Real Madrid will deserve to win it if they do win it, which they should do now.

“They need two points from their last two games, so it’s pretty much done now.

“The run since the resumption of play, nine straight wins, that deserves to win the league title alone.

:: Everything is to play for in LaLiga – watch Real Madrid look to wrap up the title and the rest of the action exclusively on LaLigaTV from GBP 5.99 per month (available on Sky channel 435, Virgin channel 554 and via Premier Player app)