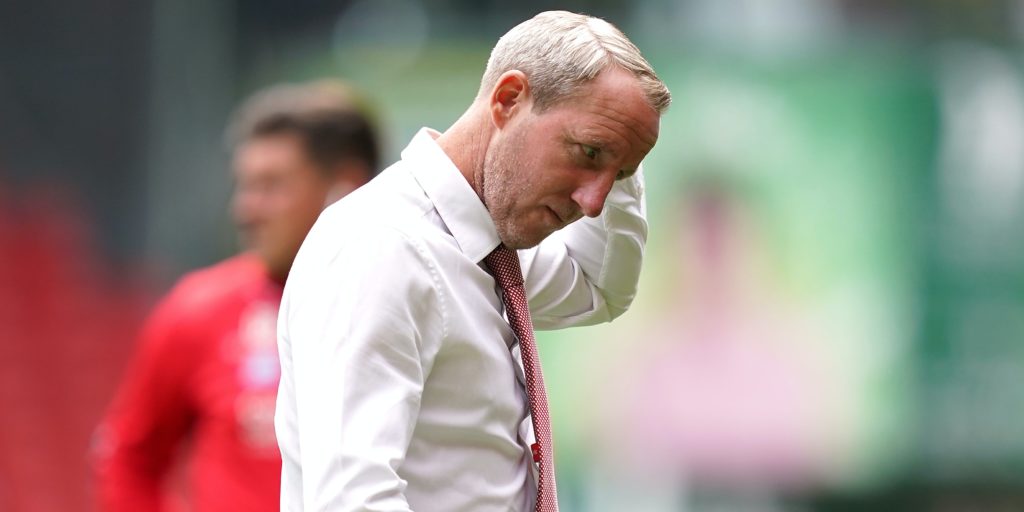 The Addicks were denied a win in added time as Lukas Jutkiewicz earned the home side a point.

Lee Bowyer criticised his Charlton players after they were denied the precious victory he thought would have made them safe from relegation in a 1-1 draw against managerless Birmingham at St. Andrew’s.

“For me, 49 points is safe,” said Bowyer. “Looking at what the other teams down there have got to play, I think we would have been safe. It hurts a lot. But we could not see the game out. The whole team has to manage the game better.

“I feel like I’m saying the same thing again and again – we should have won this game comfortably – we hit the post and there were clear chances for three or four others.

Bowyer added: “There’s no way they should have scored that goal – we had three centre halves around the ‘keeper.

“They bombarded our box with long balls and long throw-ins but there’s no way they were going to score. It should not happen.”

Bowyer remains the bookies’ favourite to become Blues’ next manager at a club where he made 94 appearances from 2009-11 and won the League Cup in 2011.

But he repeated his pre-match comments when he said: “It’s nice to be recognised but all I’m concentrating on is keeping Charlton in the Championship.”

“I could not praise the players highly enough,” said Spooner. “We spoke about application and ability and the way they took on information, they displayed it.

“We had a chat and went back to basics and that’s what we did.

“Right from the kick-off I was very impressed with us in the first 20 minutes and we made it very uncomfortable for them.”

Scott Hogan missed a 34th-minute penalty for Blues and blazed over the rebound, while they missed two early chances.

“I thought we deserved to be in that position (level) but it took until the 93rd minute to get the equaliser and we said ‘imagine if that had happened when the stadium was full’,” he said.

Blues had 24 shots and seven on target Spooner added: “That was the highest return of shots on target we have had since October-November time.”

Jutkiewicz’s goal was his 15th goal of the season – a career best – and Spooner says his return is well deserved.

“I’m delighted for Lukas – he’s an absolute model professional who puts his body on the line every game,” said Spooner.

“He takes a battering but he’s an absolute credit to the club for the way he goes about his job with his sheer desire and hunger.”

Bonne tapped home after a determined run and cross by Adie Doughty to give Charlton the lead.

Jutkiewicz squeezed home when Gary Gardner’s shot had been palmed away by goalkeeper Dillon Phillips after substitute Jude Bellingham crossed.