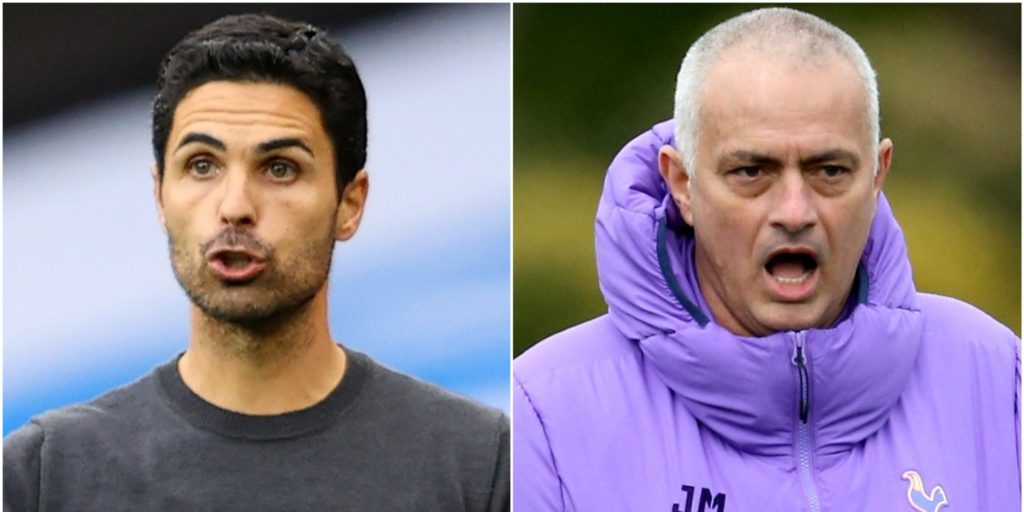 Tottenham and Arsenal go head to head on Sunday.

Jose Mourinho is still a world-class manager and could be the right man to end Tottenham’s wait for a trophy, according to Arsenal head coach Mikel Arteta.

The pair will meet in opposite dugouts on Sunday afternoon as the Gunners make the short trip to the Tottenham Hotspur Stadium for the second north London derby of the Premier League season.

Arsenal rallied from two goals down to draw 2-2 with Spurs at the Emirates Stadium back in September when Unai Emery was in charge of the hosts and Mauricio Pochettino was the away manager.

Both clubs saw their fortunes drop off soon after, with Arteta replacing Emery just a month on from Mourinho being announced as Pochettino’s successor in November.

It has not been plain sailing for either but, while Arteta is beginning to earn praise for slowly turning things around on the pitch, his north London counterpart faces criticism for performances.

Spurs currently sit ninth – a point and a place below their neighbours – and did not manage a shot on target as they drew 0-0 at relegation-threatened Bournemouth on Thursday night.

Having been sacked by Manchester United last season, Mourinho’s approach is being questioned more than ever, but Arteta believes he remains among the managerial elite.

Asked if Mourinho was still world-class, he replied: “Absolutely.

“They have had some ups and downs, but overall you can clearly see what he wants to bring to the club.

“He manages the energy, the momentum and established a really strong culture in strong football clubs that does it.

“He makes sure that he wins, and he has won in every single club that he has been.

“Obviously the situation, the timing when he arrived, is different than starting a new project right from the summer, but I am sure he will be successful.

“He has always been. He always finds the right way to do it and, it will take him a bit of time, but I am sure he will do it.”

Arteta was still playing for Everton when Spurs last lifted a trophy, winning the League Cup in 2008.

He admits he is surprised by their long wait to add further silverware but feels, in Mourinho, they have the proven winner they need to end that run.

“Yes, but they have been really close,” he replied when asked if Tottenham’s lack of trophies was a surprise.

“They have come so far as a club and as a team and they have been competing with top teams in Champions League finals, which is a huge thing to do.

“That’s probably one of the reasons that they have brought Jose in, because of his experience in dealing with those situations and having that extra edge to become a winning team.”