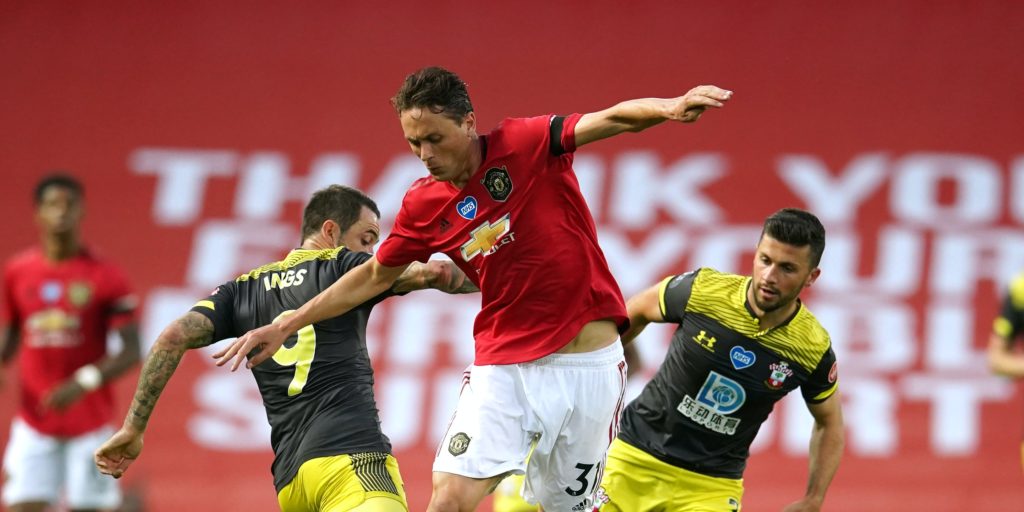 United will finish in the top four if they win their remaining three league games.

Nemanja Matic says everyone at Manchester United needs to keep their heads up and remember they remain in control of Champions League qualification following Southampton’s late gut punch.

Ole Gunnar Solskjaer’s side looked to have held on against hard-working Saints on Monday, with Marcus Rashford and Anthony Martial turning things around after Stuart Armstrong’s early opener.

But just as United prepared to jump from fifth to third, substitute Michael Obafemi prodded home at the death to secure Ralph Hasenhuttl’s men a deserved 2-2 draw at an empty Old Trafford.

The late heart-breaker was a blow with three matches of the season remaining, but Matic knows United cannot afford to wallow in self-pity.

“It’s very frustrating for us,” he said. “We had some chances to kill the game for 3-1. We didn’t use that.

“We have to say that we played against a very good team tonight, but I don’t think that we allowed them to create some great chances.

“But this is the Premier League so they can use sometimes every small mistakes, so we have to keep our head up.

“Three more games to go. The next one Crystal Palace on Thursday, so if we win the last three games we are in the Champions League.

“So, we have to stay positive, to keep working as we did until now. Everything is in our hands.”

United know they are guaranteed a top-four finish if they win their remaining matches, given they travel to fourth-placed Leicester on the final day of the season.

But Solskjaer’s Reds have three other matches to fit in before that July 26 encounter, with league clashes against Palace and West Ham coming either side of their FA Cup semi-final against Chelsea.

“Of course (we have) the semi-final of the FA Cup against Chelsea, so we will give our best to make our supporters proud.

“Of course, three months ago it was not in our hands everything.

“We had to play, we had to wait for Chelsea and Leicester to drop points, which they did obviously.

“Now we are one point to Chelsea and it’s in our hands. We’ll take it game by game. We think about Palace first.

“Then if we do our job there, like we normally are doing, so I am not afraid that we will (not) play Champions League next season.”

As for Southampton, the last-gasp draw extended their impressive unbeaten run to a fourth successive Premier League match.

Obafemi maintained that form with his goal off the bench – a memorable moment for the 20-year forward.

“It was an amazing performance from the boys and a great point away from home, even though we wanted to get all three,” the Republic of Ireland international said.

“It’s amazing to get the equaliser, it’s what I’m here to do.

“I’m happy to have gotten on and helped the team, which will give us a big boost for the upcoming games.

“There was an Under-18s Youth Cup match I was supposed to play here, but I got ill with chicken pox.

“I’ve come here today and got my goal, and that’s what I wanted to get here so I’m thankful I’ve done that.”