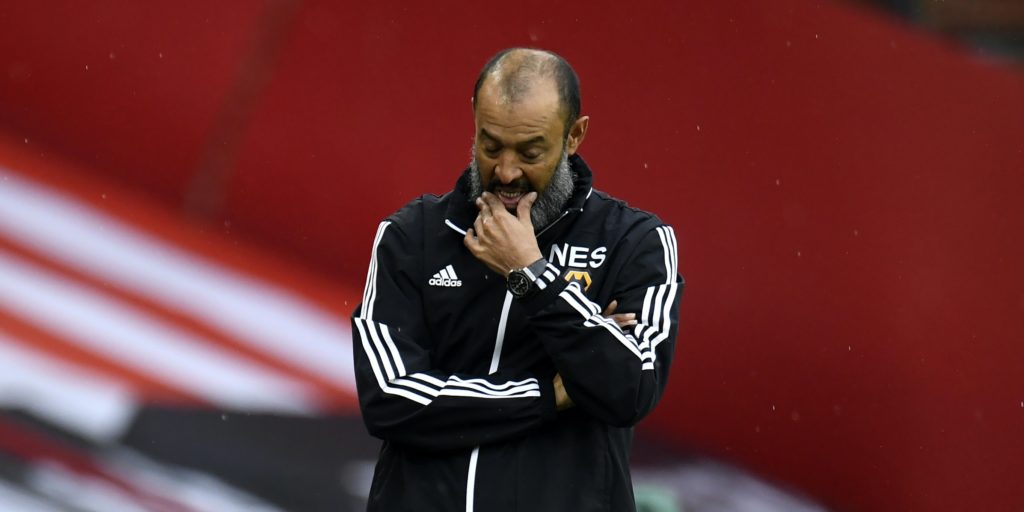 Wolves boss Nuno Espirito Santo has told his players to “reinvent” themselves as they attempt to force their way into the Champions League mix.

Wanderers have slipped to six points adrift of fifth-placed Manchester United, who are themselves one worse off than Leicester in fourth, after successive Premier League defeats by Arsenal and Sheffield United in which they failed to score.

But asked what his side, and in particular frontmen Adama Traore and Raul Jimenez, had to rediscover to return to winning ways, Nuno said: “Confidence, confidence.

“The talent is there, the knowledge is there. We need confidence and persistence and resilience to search and achieve things. Nothing else has to change.

“Keep believing in the good thing that you do, try new solutions because all the teams know each other so well that we are always trying to avoid [danger], so we require new things.

“But not only Raul and Adama, everybody has to reinvent themselves in each game.”

Wolves will attempt to end their mini-slump when Everton head for Molineux on Sunday, although they have won only one of their last nine top-flight encounters with the Toffees, for whom Richarlison has scored four times in the last three.

Nuno said: “It’s difficult to defend against Everton because they have so much talent. We have to focus on everybody, all the aspects of the Everton team.

“We have to realise that it’s not only Richarlison, they are full of talented players, so our approach is based on Everton as a team, not only individual players.”

The game will see Nuno and Everton boss Carlo Ancelotti go head-to-head for the first time since the 2014-15 campaign, when they were in charge at Valencia and Real Madrid respectively.

A 2-1 home win and a 2-2 draw at the Bernabeu in which his side led 2-0 saw the Portuguese get the upper hand during his time in LaLiga, although he has huge respect for the vastly experienced Italian.

Nuno said: “Carlo has proven that he is one of the best around, all of the titles he achieved with so many big clubs that he’s already managed.

“I have a big admiration for Carlo. I hope that I can have a good conversation with him before and after the game because he’s an inspiration for we young managers who want to proceed and want to improve. He’s a big reference.”