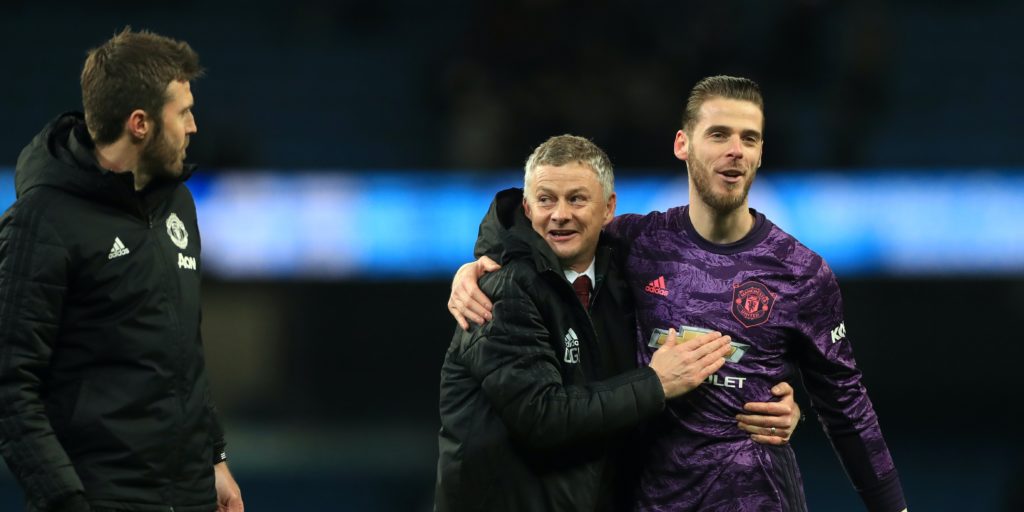 De Gea will make his 400th outing for the club against Southampton on Monday.

Ole Gunnar Solskjaer says his faith in David De Gea has never wavered as the goalkeeper prepares to make his 400th appearance for Manchester United.

Signed as a wiry 20-year-old from Atletico Madrid in 2011, the Spain international overcame initial struggles to establish himself as one of the best shot-stoppers in the Old Trafford giants’ history.

De Gea was a fax machine error away from joining Real Madrid in 2015, but the goalkeeper is now committed to United until at least 2023 and will make his 400th outing for the club against Southampton on Monday.

The 29-year-old has won United’s player of the year award for four of the six seasons since Sir Alex Ferguson retired, but questions over his position continue, with Dean Henderson impressing on loan at Sheffield United.

Yet Solskjaer has retained belief in a goalkeeper he recently called the best in the world, even during a particularly shaky spell last season.

Asked if he had considered dropping him or taking him out of the firing line, the United boss said: “It did not cross my mind for one second. Not at all.

“To be a Man United goalkeeper, you have to have a strong mentality.

“David has a strong mentality and he has been here for so long.

“You do that by walking out on to that pitch again and showing them your quality and mentality.

“He’s a strong, strong character and I didn’t see any good in taking him out at all, no.”

De Gea usurped Peter Schmeichel’s 398 United appearances in Thursday’s 3-0 win at Aston Villa, with Alex Stepney now the only goalkeeper to have played for the club more.

It will take a while to match his figure of 539 but Solskjaer is convinced the Spaniard has plenty of years in him yet.

Furthermore, De Gea has a hunger to join the aforementioned duo and Edwin Van Der Sar in helping make United champions of Europe.

“He’s been fantastic, David, and since I have been here I have enjoyed working with him,” Solskjaer said.

“He has come out and said he wants to play many, many more, maybe 10 more years.

“How long will he be able to stay at the top is just up to him because it’s a pleasure to watch him still being humble enough to work hard with Richard (Hartis) and Craig (Mawson) and the other goalkeepers around the place.

“So, 400 games, two more than Pete did. He’s won the Premier League, he’s won the FA Cup, the Europa League, the League Cup – but that’s probably not enough for him.

“I don’t think he’ll be happy until he wins the bigger trophies because staying at Man United in this time and not having won more, I think that’s something that he will feel is a black dot in his career.

De Gea’s position as number one raises questions over the future of England hopeful Henderson, while an unchanged starting line-up for four successive league matches has left a number of players on the outside looking in.

Solskjaer says he has began planning for next season, but conversations with those that may want to leave Old Trafford pastures new will have to wait.

“Not really because you don’t really have the time or focus,” the United boss said.

“You can’t think three months ahead now with players who are in and around the first team.

“Of course, there’s youngsters who you know are going to go out on loan, that need that exposure, game time.

“But the ones are who are in and around the first team now, they only have one focus and that’s Southampton.