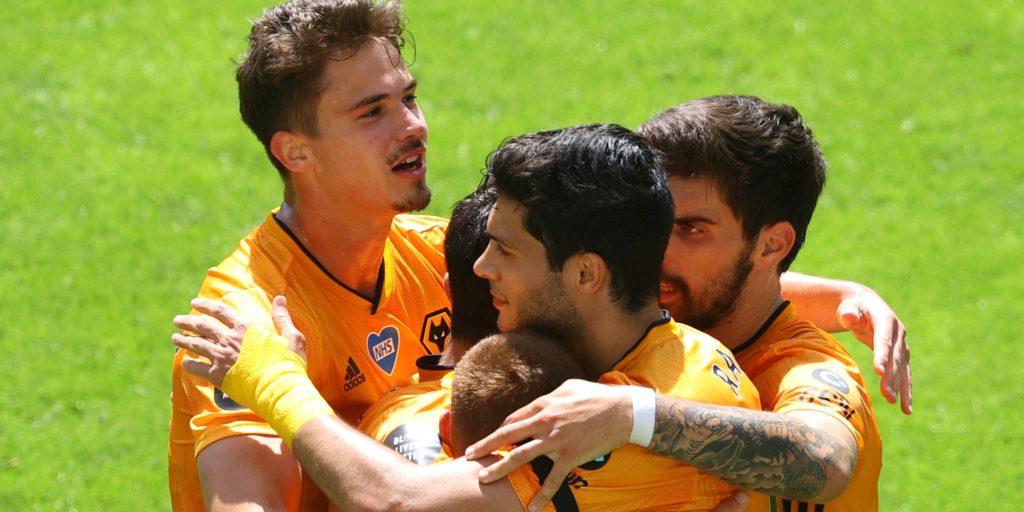 Wolves are sixth in the Premier League after their win over Everton.

Raul Jimenez has warned Wolves’ rivals they have rediscovered top gear in the race for Europe.

The striker scored his 25th goal of the season as Nuno Espirito Santo’s side comfortably beat Everton 3-0 on Sunday.

Manchester City’s reprieve by CAS after they successfully appealed their two-year European ban means only the top four will reach the Champions League.

Wolves are sixth and end their season at Chelsea on July 26 – 366 days after they started the campaign in a Europa League qualifier against Crusaders in Belfast but Jimenez insisted they will not run out of gas.

“It’s difficult because we have a very difficult schedule now, but I know that everyone is in their best form, we bounced back and we here we are.

Jimenez opened the scoring from the spot after Lucas Digne fouled Daniel Podence before Leander Dendoncker’s header made it 2-0 immediately after the break and Diogo Jota wrapped up the scoring.

“I’m very happy for this win , we knew that we had a good opportunity, so I’m proud of the team,” Jimenez told the club’s official site.

“It’s important to come back to get into our route and where we want to be, so it was difficult to lose matches and now come here to our home and bounce back like this, it’s very important for our aspirations.”

Everton boss Carlo Ancelotti hit out at his players’ attitude following defeat which kept them 11th.

Seamus Coleman admitted the Toffees let themselves down in their defeat at Molineux.

“As individuals in the dressing room and as a club, we need to be expecting better. We need to have a look at ourselves,” the defender told the club’s website.

“Every time we go out and play for this club, it’s got to mean something and – at Tottenham (a 1-0 defeat) and here – it didn’t look that way.

“Sometimes you can look at the ins and outs of tactics or why we didn’t get the ball to the attacking players but sometimes it comes down to commitment and desire and wanting it more than the opposition.

“The lads really need to dig in, myself included, get our heads down or that won’t be good enough for this manager. There are no hiding places.”