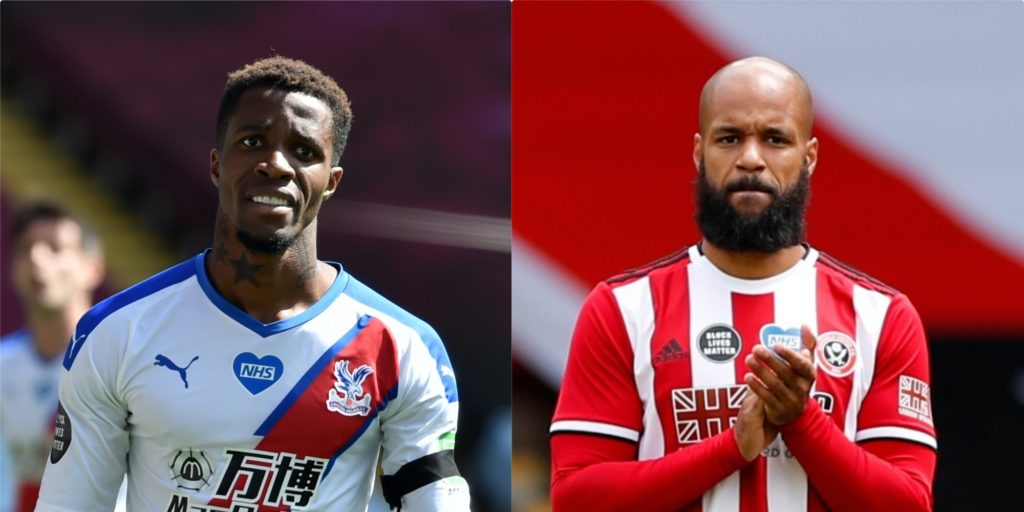 Wilfried Zaha and David McGoldrick were the victims of online racist abuse.

Former Trinidad and Tobago goalkeeper Shaka Hislop has accused UEFA and FIFA of being more concerned with finances than tackling racism after two Premier League footballers spoke out against online abuse.

The 51-year-old believes the anti-racism messages from the top of football are not strong enough.

Hislop, honorary president of Show Racism the Red Card, was speaking after Wilfried Zaha and David McGoldrick were victims of online racist abuse over the weekend.

“You have fines of 10,000 or 15,000 euros for racist chanting but you have larger fines for financial irregularities,” he told the PA news agency from his home in Boston.

“It says to fans and black, Asian, minority and ethic players it’s more important to have a balanced balance sheet than it is you being safe and feeling you can come to a game and not be racially abused.

“That message is coming from the top and that is as empowering to that extreme element coming to football as anything else.

“The authorities have to have harsher sentences around racism and racist chanting in stadiums.

“I have no problem with FIFA and UEFA allowing individual FAs to have their own punishments.

“But if those fines, suspensions and punishments are too weak – which we saw particularly from the Italian FA – then UEFA has to step in. If UEFA don’t do a good enough job of policing their own members then FIFA has to step in.”

FIFA and UEFA have been contacted by PA for comment.

A FIFA spokesperson said: “FIFA recognises and embraces its responsibility to lead the way in the global fight against discrimination in football.

“We expect all member associations, leagues, clubs and disciplinary bodies to adopt similar procedures as FIFA, as well as a zero-tolerance approach to incidents of racism in football, and to apply harsh sanctions for any such kind of behaviour.”

The spokesperson pointed out that the FIFA Disciplinary Code was updated in July last year to allow the organisation to take firmer action.

On the issue of racism in football, UEFA president Aleksander Ceferin recently told ESPN: “Clearly, we have to do more, and we will do more.

“Racism – but not just racism; homophobia and sexism, too – are connected to society, and football is a reflection of that.

“We are in the spotlight. We have a lot of fans, and many times people use football to show their idiotic ideology. I think UEFA is doing a lot, but like I said, slogans and punishments aren’t enough.”

“It is a very powerful tool, we use it at Show Racism the Red Card to great effect, but when you have a technology like this it will be abused,” said the 51-year-old, who made 221 Premier League appearances.

“They are reactive to a commercial concern. It’s only when they start losing money you have some sort of a moral guideline.”

A United tweet said: “As a club we will support David McGoldrick and will do all we can to find the perpetrator of this disgusting message.

It comes a day after West Midlands Police arrested a 12-year-old boy in relation to racist abuse sent to Zaha.

Palace manager Roy Hodgson, speaking after his side’s 2-0 loss at Villa Park, described it as a “cowardly, despicable act”.

In a post on Monday, Zaha thanked the police for taking swift action, but said the case showed the need for more action to be taken to address the problem in society.

“People need to understand that whatever your age, that your behaviour and your words come with consequences and you cannot hide behind social media,” Zaha wrote.

“It is important social media platforms do as they did yesterday and seek out those individuals and remove them.

“This is not the first time I have received messages like this, nor am I the only player to receive messages like this – it happens every day. I want to thank everyone for the love and support but enough is enough!

“It is not enough to be disgusted by these messages and move on. It is enough to just say #notoracism. We need action, we need education, we need to change.”