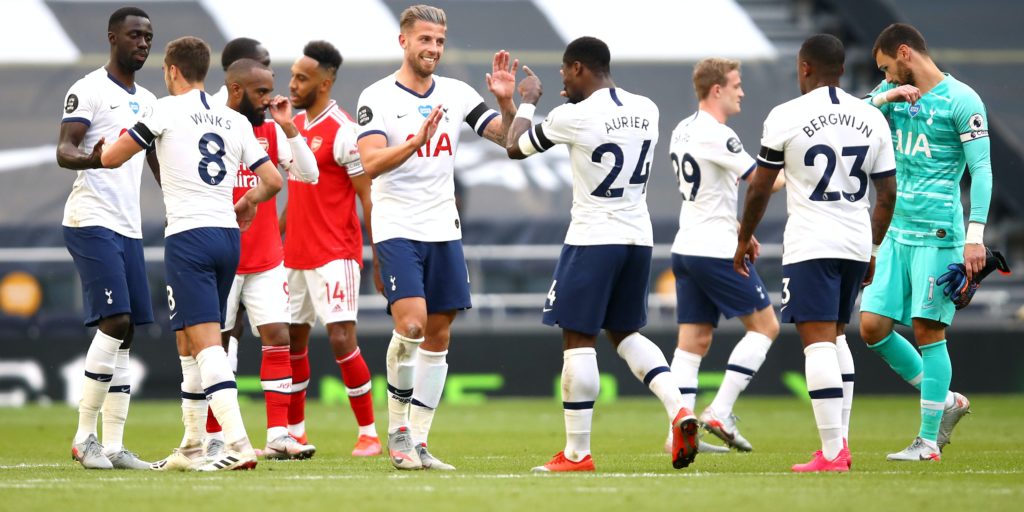 Tottenham are currently eighth in the Premier League with three matches remaining.

Tottenham’s derby hero Toby Alderweireld hopes the 2-1 win over Arsenal can be a turning point to help his side seal European qualification.

Spurs revived their Europa League hopes with the victory over their rivals, which came courtesy of the Belgium defender’s 81st-minute header.

The three points, the result of a tactical success by boss Jose Mourinho, lifted spirits which were especially low after failing to have a shot on target against Bournemouth on Thursday.

Spurs were on the end of some criticism for that, but Alderweireld says the 2-1 win over the Gunners put that right and can be a springboard for the final three games of the season.

“I don’t want to say like, ‘No, all the criticism, everything [people say] is untrue’, but of course it hurts because we work so hard,” he said.

“So I think after the lockdown defensively we’ve been a lot stronger. We’re getting there.

“We have some momentum going so I think it can be a changing point. But I think today and in this period when things aren’t 100 per cent going your way, the thing is to work very hard and it’ll come.

“If you work hard, things will come. Today we showed we have character. At difficult moments we were there. And then we have quality.”

It was an entertaining game at Tottenham’s new stadium – the first north London derby played there – and Arsenal will feel frustrated to have left with nothing.

They went ahead through Alexandre Lacazette’s stunning strike before allowing Son Heung-min to equalise less than three minutes later following a defensive howler.

Mikel Arteta’s side bossed most of the second half, yet it was goalkeeper Emiliano Martinez who was the busiest of the two goalkeepers.

He kept Spurs at bay in his first taste of derby action, but it is not a day he will remember fondly.

“I can’t even explain,” he said. “We didn’t start like the manager wanted, we were giving the ball away for no reason.

“As time was going on we started playing well, we controlled midfield and we outplayed them. I feel sorry for the supporters because we know what it means for them.

“I thought we created chances but not enough to score, Auba (Pierre-Emerick Aubameyang) had a great chance and then Hugo (Lloris) made a great save. We have to put them in.

“I am not proud at all, I hate losing. I hate it to be honest.

“I know what it means to supporters, we made two silly mistakes with the goals and we have gave them two chances. It is what it is.”