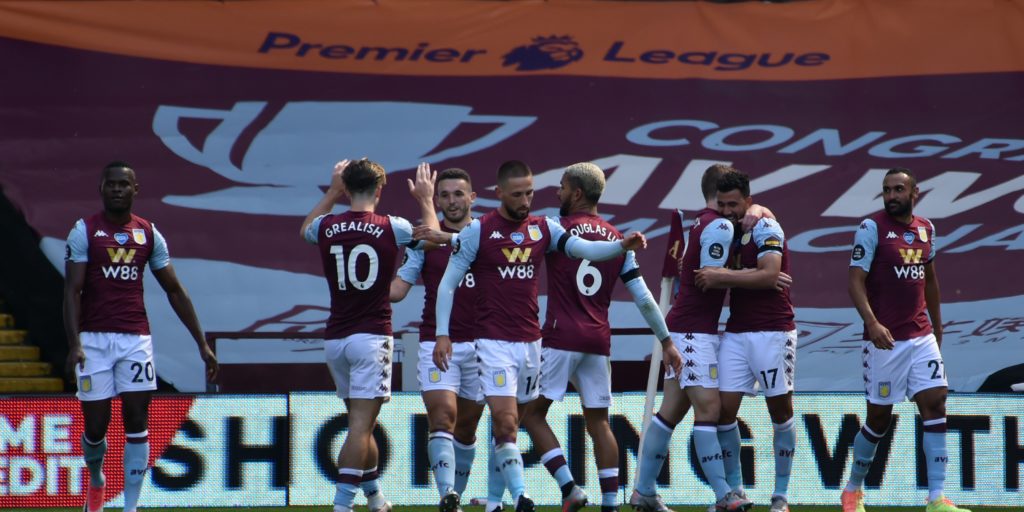 Dean Smith’s side are four points from safety with three games remaining.

Trezeguet scored twice as Aston Villa boosted their slim chances of staying in the Premier League following a 2-0 victory against Crystal Palace at Villa Park.

The Egypt international scored in each half to hand third-from-bottom Villa their first win in 11 league games and move them to within four points of safety with three games left.

But VAR again had a controversial input as Palace were denied a seventh-minute opening goal when it was decided an effort from Mamadou Sakho was handball, with Villa also having a penalty overturned later on.

Dean Smith’s side had taken just two points out of their last 30 available and had scored twice in eight league games.

Trezeguet’s opening goal was Villa’s first in 322 minutes, since Ahmed Elmohamady’s equaliser at Newcastle on June 24.

Palace thought they had the breakthrough in the seventh minute. Sakho appeared to glance home a free-kick from Luka Milivojevic but VAR ruled it was a handball, with the ball coming off his upper arm.

Smith’s side missed a great chance to take the lead in the 31st minute. Ally Samatta rose highest to a deep cross from Elmohamady but could only head firmly over the crossbar.

Jack Grealish forced the first serious save when his sidefooted volley from Elmohamady’s centre was turned around the post by goalkeeper Vicente Guaita seven minutes before half-time.

First the Spaniard stuck out his left foot to block a shot on the turn, then dived to his right to smother.

Villa took the lead in the fourth minute of time added on at the end of the first half. Trezeguet, unmarked, sidefooted home at the far post after Conor Hourihane’s free-kick flicked off Joel Ward.

The hosts thought they had won a penalty within 71 seconds of the restart. Grealish went down dramatically under a challenge from Patrick Van Aanholt and referee Martin Atkinson pointed to the spot, but VAR ruled no foul by the Palace left-back.

Villa were denied in the 58th minute when Hourihane’s free-kick was tipped around the post by Guaita.

But Smith’s side did not have to wait long for that second goal – and it was again Trezeguet on target. The former Anderlecht winger toe-poked the ball under Guaita as Palace’s defence stood still following Hourihane’s pass.

Palace threatened when the clean through Van Aanholt was denied by Reina in a one-on-one, before Benteke headed over.

But Villa just about deserved to see out the win – their first for over five months – with Benteke red-carded after the final whistle after appearing to kick out at Ezri Konsa.