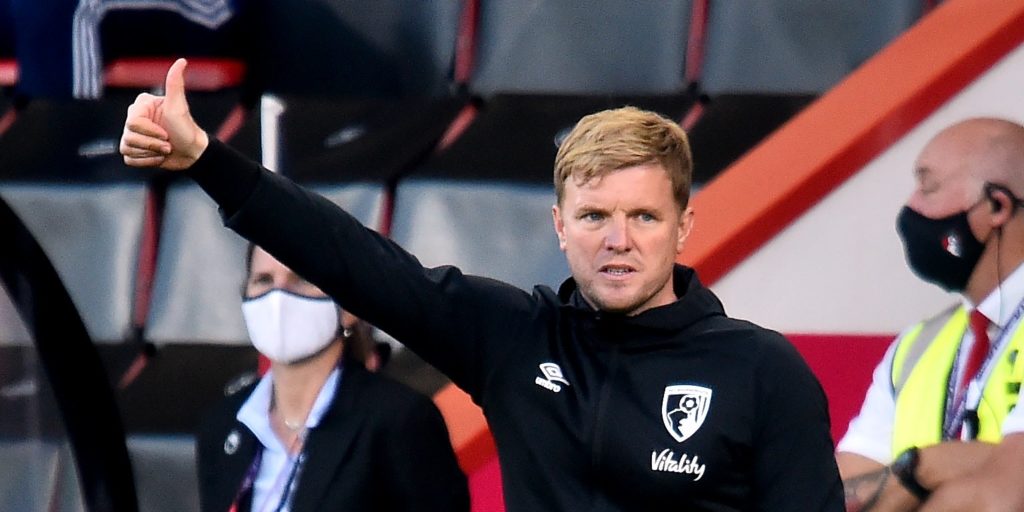 Dominic Solanke ended his top-flight goal drought with a timely brace as the struggling Cherries dragged themselves back from the brink to move within three points of safety following a stunning 4-1 win.

Howe’s side appeared doomed following a limp first-half display in which they deservedly trailed to a 23rd goal of the season from the division’s leading scorer Jamie Vardy.

But a bizarre two-minute spell in which a dreadful error from Kasper Schmeichel allowed Junior Stanislas to level from the penalty spot and Caglar Soyuncu was sent off in the aftermath of Solanke’s first goal turned the remarkable south-coast clash on its head.

Jonny Evans’ own goal put the result beyond doubt seven minutes from time before Solanke – without a goal in his previous 38 top flight appearances following a GBP 19million move from Liverpool – completed a memorable comeback with his second.

“It’s a massive result for us, we knew we needed to win,” said Cherries boss Howe.

“It was a really difficult first 45 minutes. Leicester played very well, we didn’t.

“But so pleased with the players because in that moment when everything looks like it’s conspiring against us we found something from somewhere.

“Again, against the odds, we showed great qualities, which has always been the hallmark of the team and the club. And we’re going to need that even more so in the next three games.

“I think we’ve got it all on to achieve it but we can do it. We wouldn’t have been able to do it if we hadn’t got the win tonight. It keeps us alive.”

Leicester were relatively comfortable until Schmeichel inexplicably hammered the ball straight at team-mate Wilfred Ndidi from a goal-kick. Ndidi, in his haste to rush back, hauled down Callum Wilson, allowing substitute Stanislas to stroke down the middle from the spot in the 66th minute.

Bournemouth had control of the match less than two minutes later as Soyuncu was dismissed for kicking out at Wilson after Solanke’s low effort squirmed home.

Foxes defender Evans later deflected a low Stanisals effort into his own net with seven minutes remaining, before Solanke paid back some of his hefty transfer fee with another composed finish.

The overdue victory ended an alarming nine-match winless run for the hosts to boost their hopes of catching relegation rivals West Ham and Watford.

On a slightly sour note for Bournemouth, key defender Nathan Ake left the ground on crutches after being injured in the first half blocking a Vardy shot.

Howe revealed the player is unlikely to feature in the club’s remaining games against Manchester City, Southampton and Everton.

“Nathan is sore. I think he has done something to his groin,” said Howe.

“With such a short time of the season left, I think it is doubtful he will play again.”

The Foxes’ hopes of a top-four finish are now out of their own hands following a seventh successive away game without a win.

“I didn’t see that coming, to be honest,” said Rodgers.

“Second half we lacked personality and that’s the biggest disappointment. You’ve got to grind it out sometimes in football.

“We gave them a lifeline into the game with the penalty and then all of sudden very quickly you are 2-1 behind, but I was more disappointed with the reaction.

“I would say a big apology to the supporters because that was unacceptable for a Leicester team.

“You cannot do that and I have never been anywhere near that since I’ve been here, it was a huge disappointment.

“We lacked the spirit and attitude, especially when we went down to 10 men.”