Wigan score eight with Hull in a right state 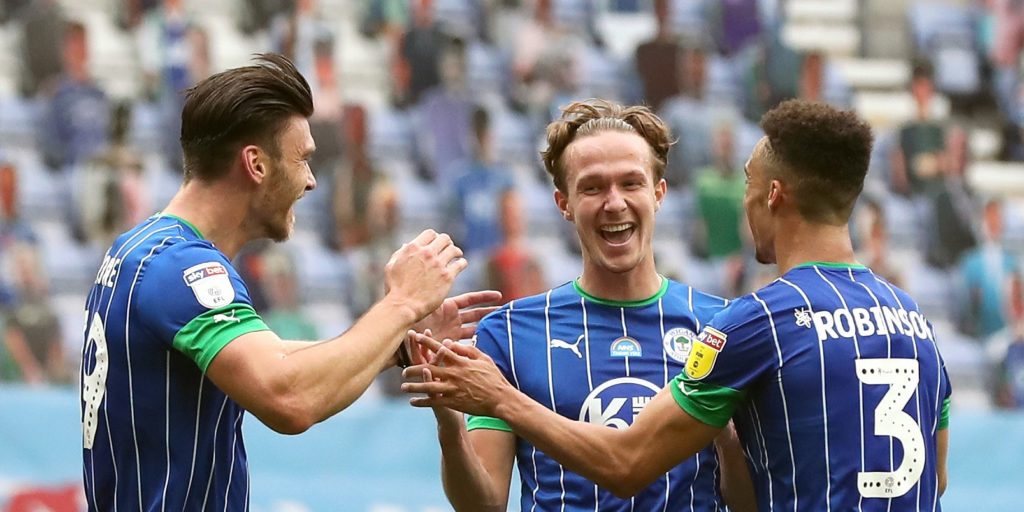 The relegation-threatened Tigers were 7-0 down at half-time.

Wigan scored seven goals in an incredible first half as they thrashed fellow Sky Bet Championship relegation battlers Hull 8-0 at the DW Stadium.

Kal Naismith set the tone with a goal in the opening moments of the contest, and as the hosts continued to tear into a woeful Tigers side thereafter, Kieffer Moore and Kieran Dowell netted a brace each and Jamal Lowe and Joe Williams also got on the scoresheet, all before the interval.

It could have been even worse for the shell-shocked visitors, with Naismith having hit a post at 2-0.

Wigan then rattled the frame of the goal again after the break via an Antonee Robinson shot, before Dowell completed his hat-trick with a fine volley.

The remarkable result is both Wigan’s biggest league win, surpassing a 7-0 victory against Oxford in 2017, and Hull’s joint-biggest league loss.

It left Latics, with two games remaining, on 57 points, 12 points clear of 22nd place – occupied by Hull, who lay a point adrift of safety.

The fact that Wigan are facing a 12-point penalty – against which they are appealing – due to having gone into administration means they are now effectively sitting just outside the relegation zone, above Hull courtesy of their superior goal difference.

While the future is uncertain for Paul Cook’s men, certainly this was some statement from the team, who have lost only one of their last 13 games and won eight of their last 11, and made for the grimmest viewing for his opposite number Grant McCann.

Wigan went at their opponents right from the off, with Williams bringing a save out of George Long with a strike in the opening few seconds.

Moments later, with around a minute on the clock, the hosts were in front as Dowell sent a delicate cross to the back post and Naismith headed home.

As Wigan kept up the intensity, Naismith and Lowe shot wide and Long blocked an effort by Moore.

At the other end, an ambitious shot from George Honeyman was comfortably dealt with by David Marshall, who then got away with sending a kick straight to Jon Toral, with the Spaniard’s shot being blocked by Cedric Kipre.

Wigan then proceeded to net another six times in a scarcely believable spell lasting just over a quarter of an hour.

Moore turned and slotted in to double the advantage in the 27th minute, Naismith crashed a shot against a post two minutes later, and three minutes after that Dowell fired in to make it 3-0, with Hull providing little resistance.

Lowe, who had provided assists for the second and third, then netted himself in the 37th minute having received the ball from Nathan Byrne, who subsequently teed up Moore to head home in the 40th.

Two minutes later Hull lost possession and Dowell burst into the box before firing in number six, and in stoppage time it was then a magnificent seven courtesy of a Williams drive from outside the box.

McCann made three changes at the break, but Hull could not prevent Wigan from further boosting their lead.

Robinson came close to getting in on the act as his shot bounced off the top of the bar, before Dowell scored his third, and the best goal of the game, with a superb finish in the 65th minute.