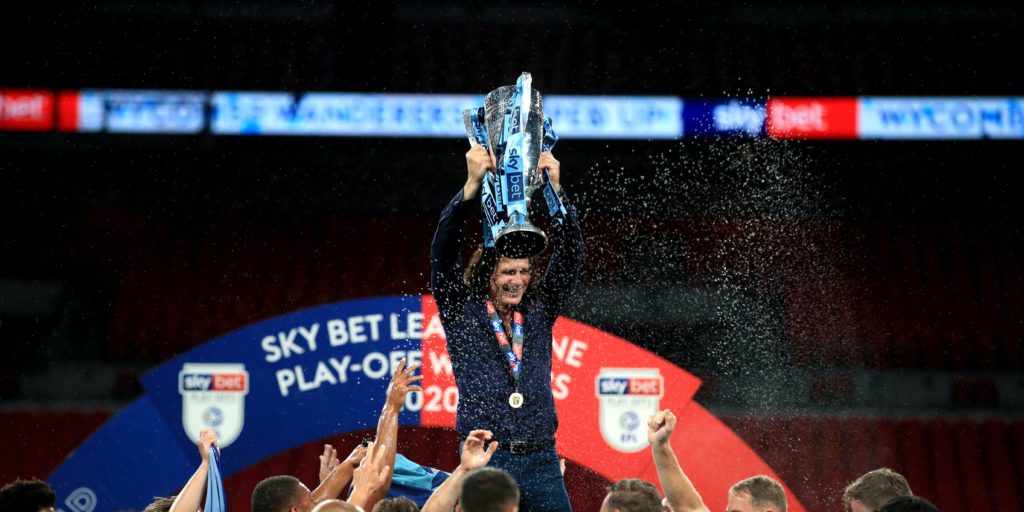 Wycombe sealed promotion to the second tier for the first time in their 133-year history after victory against Oxford.

Wycombe manager Gareth Ainsworth said taking Wycombe into the Sky Bet Championship for the first time in their history was beyond his “wildest dreams”.

The Chairboys secured promotion after a close-fought 2-1 victory over Oxford in the League One play-off final at Wembley.

A deflected Anthony Stewart header gave Wycombe an early lead but the U’s fought back in the second half, with Mark Sykes’ looping cross-shot levelling the score.

Wanderers retook the lead from the penalty spot in the 79th minute, after Oxford goalkeeper Simon Eastwood brought down Fred Onyedinma and Joe Jacobson stepped up to seal their promotion to the second tier for the first time in their 133-year history.

“Amazing, amazing feeling to take this club into the Championship is just surreal, it really is, it’s beyond my wildest dreams,” Ainsworth said.

“I stood on that touchline six years ago, I stood here five years ago and got beat on penalties and today is just a culmination of the heart and desire of those boys. They absolutely delivered and some more.

“It wasn’t the greatest game we’ve played in the world, we were much better in the first game at Fleetwood and held on really well in the second game, but this was always going to be cagey.

“My goalkeeper Ryan Allsop has made two world-class saves, they really came at us, they’re a good side but that was destined today.

“There’s 25 individual stories that have ended in the Championship and I’m so, so proud of the boys, they’ve been amazing.”

Oxford manager Karl Robinson was proud of his team after the play-off final and praised their performance at an empty national stadium.

Robinson said: “I’m extremely proud of them as you can well imagine.

“We’ve been done very early on by a goal that you expect to come from the opposition, the longer the game I thought our players played wonderfully well. We made some really key chances at important stages in the game.

“All the things that were out of our control today didn’t fall for us. Wycombe have gone through, whether I think it’s right wrong or indifferent the way they play that’s irrelevant, a massive congratulations have to go to them.

“But for me a large part of that game we’ve probed and not taken our chance and the mistakes that we made were small little errors and unfortunately it’s cost us.”